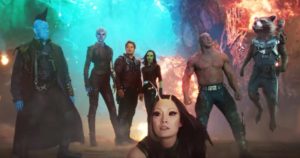 The Guardians of the Galaxy, photo courtesy Marvel Films/Disney, 2017

From the very first few minutes of Marvel’s latest summer blockbuster, the film audience is greeted by their beloved ragtag Guardians as they face a large tentacled alien beast intent on stealing a set of powerful batteries held by a gold-skinned race of elitists called the Sovereign.

That paragraph alone should make for a confusing and obscure opening premise, were it not for the appearance of diminutive Baby Groot in the foreground as he happily grooves to the sound of ELO’s “Mr. Blue Sky” while his cohorts enter the bloody, alien-gooed fray.

And just like that, we are right thrust right back into the retro-futurist fringe setting established by director James Gunn in the introductory 2014 chapter of space-faring piracy and expletive-filled hi-jinks. 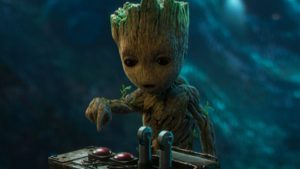 One of the more eclectic offerings of the Marvel Cinematic universe, Guardians of the Galaxy relies on the more obscure mythological elements of the comic books by focusing on off-world activities, far away from the Earth-bound heroes of the last dozen or so films.

Rather than directly jump into the unavoidable confrontation with the mad Titan Thanos (that privilege is reserved for the upcoming Infinity War two-parter), this second volume instead explores the unanswered question left with audiences by Nova Prime (Glenn Close) at the end of the last film: just who exactly is Peter Quill’s (Chris Pratt) father, and what is his non-human lineage? 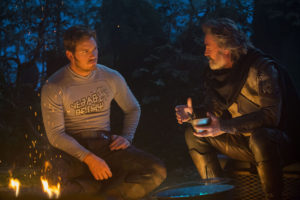 The story picks up several months after the last film, with the Guardians having become famous for their heroics, with their services as heroes for hire in high demand.

During their latest gig destroying a large monster for an elitist race of gold skinned people known as The Sovereign, Rocket (voiced by Bradley Cooper) can’t help but steal some of their precious and powerful power batteries, which launches a manhunt against our ragtag group of misfits.

The chase leads them to an alien planet where they have a chance encounter with a humanoid being named Ego (Kurt Russell) who reveals himself to be Peter’s father.

As father and son reconnect and Peter learns about his remarkable lineage albeit unaware of his Ego’s ulterior motives, sibling rivalry continues between Gamora (Zeo Saldana) and Nebula (Karen Gillan), while the eccentric Yondu (Michael Rooker) is once again under contract and on the hunt for the Guardians.

Add silly hi jinks by Drax (Dave Bautista), Rocket and newcomer Mantis (Pom Klementieff), and you’ve got yourself another action-packed space adventure filled with humor, wit and lots and lots of visual effects and surprise cameos. 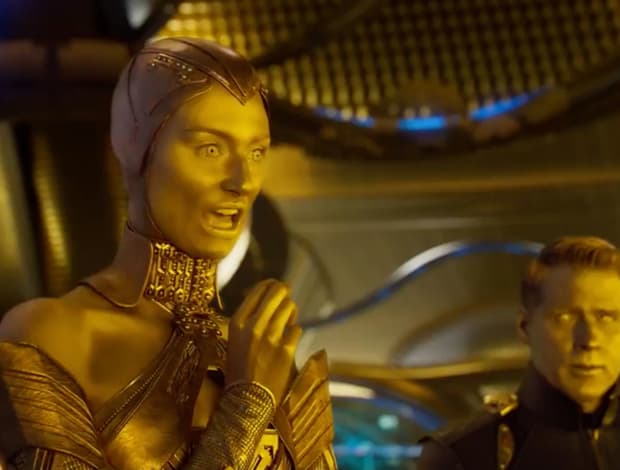 Elizabeth Debicki and Ben Browder in GUARDIANS OF THE GALAXY VOL. 2, Courtesy Marvel/Disney, 2017

Though this second volume still packs a much needed melange of humor, action and cast chemistry, it’s not as fleshed out as its predecessor. Still present is the idiosyncratic banter from each Guardian — seems everything still goes over Drax’s head despite his lightning quick reflexes — but the overall story arc regarding the Quill/Ego link and the estranged relationship therein, feels shoehorned into the franchise, likely as a placeholder whilst the rest of the Marvel films catch up to the Infinity Stones saga.

And when the plot’s not fixated on the aforementioned misfit pair, we get to indulge in the awkward sibling rivalry that still exists between Gamora and Nebula, as they impolitely continue to try and kill each other over who was Daddy’s favorite.

The film is a multi-purpose product: it’s an entertaining piece for newcomers who don’t know their Hulk from their Iron Man, while hardened Marvelites get to enjoy the script’s generous helping of cameo appearances and obscure comic book trivia hidden in the backdrop. I especially enjoyed how they finally explained why and how Marvel co-founder Stan Lee always managed to briefly appear in each film until now.

Those with a keen eye for Hollywood talent and a knowledge of the Guardians’ back catalogue will appreciate secondary roles by Sylvester Stallone, Michael Rosenbaum, Ving Rhames, Michelle Yeoh and the voices of both Miley Cyrus and Nathan Filion.

Is Vol.2 a worthy addition to the digital record collection? Sure it is. Despite its few shortcomings, it has the flair of past Marvel films simply by virtue of its self-deprecating nature, its seemingly endless coffers (thanks for buying Marvel, Disney!) and a growing stable of willing talent ready to stay the course for years on end.

'Marvel’s Guardians of the Galaxy Vol. 2 Continues to Bask in Sci-Fi Classic Rock Goodness' has no comments