Of the numerous legends of yore that have made their way onto the screen over the last century, their common thread was as to whether the director’s interpretation was at all faithful to the source material, or at the very least, which was best among them.

On the subject of Arthurian Legend, I’d venture that John Boorman’s Excalibur came fairly close, however popular Brit filmmaker Guy Ritchie decided he needed to excite the audience with more action, busier camera movements and editing and music reminiscent of his existing body of work, as is his artistic right.

The result? King Arthur: Legend of the Sword, a veritable mess that, like its central titular blade, should have stayed buried in the stone right up to the hilt. 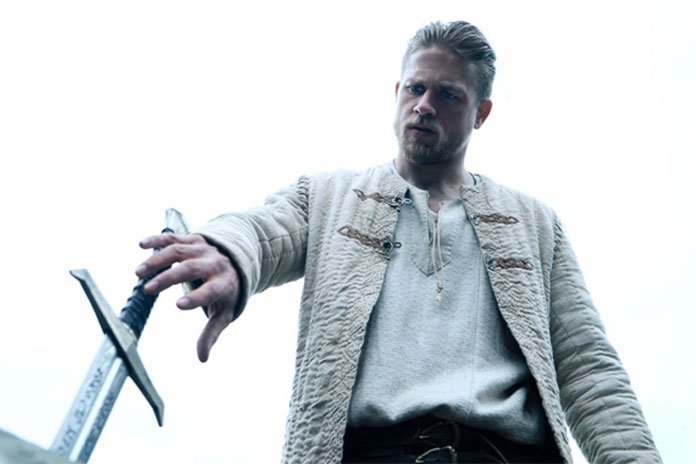 Star Charlie Hunnam (The Lost City of Z, TV’s Sons of Anarchy) plays Arthur, a streetwise scoundrel whose life education since being orphaned as a boy has consisted mostly of mastering the art of thieving, hustling and hand-to-hand fighting.

Ruler King Vortigern (Jude Law), who tried to murder his own brother Uther Pendragon (Eric Bana) to take over the mighty sword Excalibur, seeks to regain control of the sword long burid into astone beneath the lake waters of Camelot. When Arthur comes of age and the waters recede, the evil monarch — who also dabbles in some black magic — seeks to force all men of age to pull the sword our of the stone, so he can kill Uther’s heir once and for all.

It isn’t long before the headstrong Arthur gives it a go, pulling the blade out of its rock prison and automatically giving hope to a nation under dark rule.

Swashbuckling ensues. Also, visual effects galore, all of them completely out of place with this sort of genre piece. 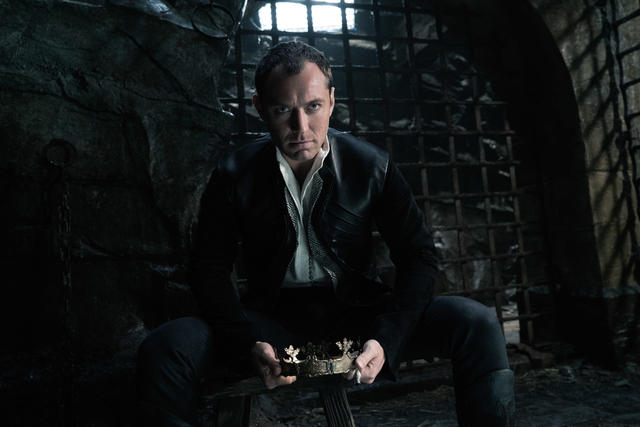 Oh, where to start: Granted, Charlie Hunnam’s experience playing Sons of Anarchy biker club President Jax Teller privdes him with the personality traits and swagger needed to properly play a street thug turned king-designate. All the same, the inclusion of too much banter between he and his merry gang of savvy criminals gives the movie an improper feel, as if director Guy Ritchie felt the story needed to fit into his existing body of work, somehow. Alas, this tale isn’t supposed to be all Lock, Stock and Twelve Swiging Swords.

Jude Law tried to embrace the role of villain, but the uneven narrative barely gives him any time to shine, resulting in a less then threatening baddie who spend more time sacrificing loved ones to nether gods in search of temporary power-ups, all too videogame-like.

Speaking of which, the Excalibur scenes feel right out of a Mortal Kombat sequel, turning the screen into an obsolete display of gratuitous destruction, eliminating any sense of impending danger for our heroes. I mean, why even risk your men when one magic sword can destroy dozens of enemy soldiers with a handful of swings, right?

True, the film packs a wallop in the action and swashbuckling department. The problem lies entirely in the stylistic choice and narrative delivery. Those eager to try this based on the abvoe movie trailer are bound to be disappointed. I strongly suggest you go and check out the 1981 Boorman version of Excalibur instead. Nowhere near as high-tech, but at least plausible and faithful to the albeit vague source material.
Verdict:

'Now on Blu-Ray: King Arthur Legend of the Sword As Dull As Its Fabled Blade' has no comments