As the fifth (and no doubt not the last) of the Hasbro Toys – inspired line of action figure based sci-fi films, Transformers The Last Knight adds very little to the quickly aging franchise about alien robot shape shifters caught in a never-ending battle for the protection/destruction of humanity.

I never rooted for the bad guys so much until this film. So help me. Even I’m hailing Megatron by now. 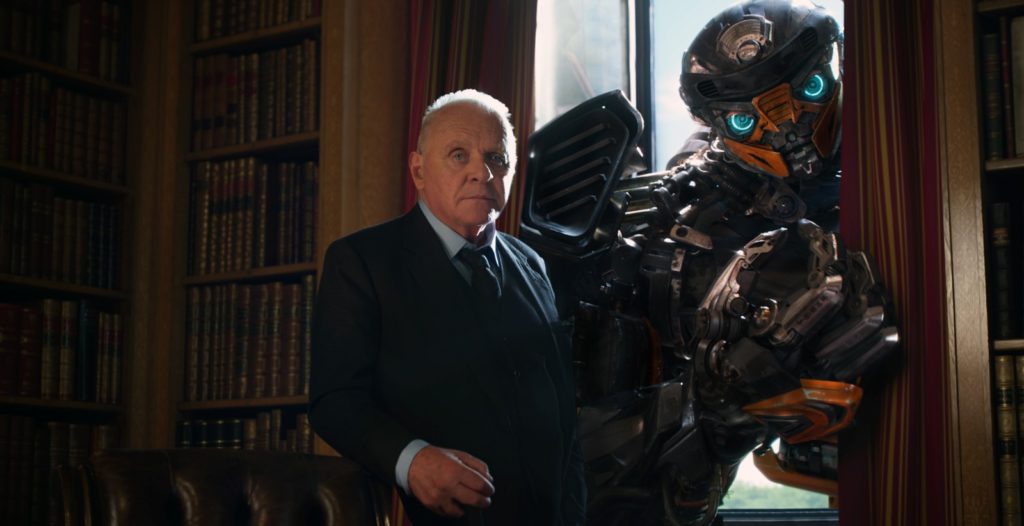 After the many events of the first four films, what with Optimus Prime and Megatron’s sides fighting each other with we meek humans caught in the crossfire, it’s no surprise that Transformers are declared illegal and robotica non grata on the planet.

With Optimus out in the cosmos looking for their home planet of Cybertron while the rest of the Autobots hide in scrap yards with the help of Cade Yeager (Mark Wahlberg), while the human-based TRF (or Transformer Reaction Force) hunts down any and all alien robots on the planet.

The stakes are raised on a planetary level when Optimus reaches Cybertron and meets the alien (and alleged creator of the Transformers race) Quintessa (voice of Gemma Chan), who speaks of the remnants of Cybertron having to face a foe in the guise of Unicron, which has posed as a planet for eons — Earth.

Soon, the battle for survival begins on a global scale, with heroes old and new pairing together to stop this threat once and for all.

Oh, good. I actually lost track, myself, about five minutes after “Unicron”.

What to Skip (and there’s quite a bit):

I can’t pretend to call myself a Transformers expert, despite having watched the original 80s cartoon and having owned Optimus at some point in the decade during the show’s heyday.

Even with some buried memories of the Transformers animated film circa 1986 or so, I was still having a rough time remembering some of the fringe elements of the show/toys’ mythology, so to get me through this mud-thick mess of a plot.

It’s bad enough that I am likely ahead of the mass population’s learning curve in all things Autobots/Decepticons, and that Michael Bay appears to throw everything but the kitchen sink into this latest installment – going so far as to recall original cast member Josh Duhamel to interact with latter-day hero Mark Wahlberg – but if we can go at least half an hour without Autobot leader Prime having to wax philosophical about his own name, it won’t be too soon.

When once there was a time when Megatron posed a definite threat to humanity, here he’s pretty much relegated to second tier villain, even negotiating the release of his fellow villains via a human lawyer (I swear by the tires of Bumblebee I’m not making this up.)

Add to the mix some over-the-top caricatured supporting robot players, a flimsy tie-in to Arthurian Legend, a throwback to the Witwicky family and their ancestral link to the Transformers race on Earth through the ages AND Academy Award winner Anthony Hopkins hamming it up as a questionably unstable Earl with a plot exposition complex, and you may very well survive this TWO AND A HALF HOUR marathon of mayhem, destruction and expensive special visual effects.

Have I missed anything? Probably just as well.

Despite the absolute mess that is this film, there are still a few neat touches: Including a human-sized Transformer butler/manservant named Cogman, voiced by Downton Abbey’s Jim Carter (Head butler Carson on the show); the ability to still recruit the original show’s voice talents Peter Cullen (Optimus) and Frank Welker (Megatron) lends a minimal amount of cred to this extraneous project.

Also, you can tell where the 200 million plus budget for the film went, by the visuals and explosions alone. The story might not make much sense, but boy does it blow up good.

The Goodies:
The film does look amazing in glorious HD – for the lotta good it’ll do — while the many bonus features on the second disk mostly focus on the location shoots and ambitious shots planned by a demented sounding Bay as he leads his production troops from venue to venue, adding shots on the go so to maximize on the wow factor.
Verdict:

'Now on Blu-Ray: Transformers The Last Knight Will Make You Wish The World Would Indeed End' has no comments