October 30, 2017 marks the 79th anniversary of the radio broadcast event that caused havoc in the United States on the eve of Halloween. Dramatist Orson Welles had created a radio play based on H.G. Wells’ science fiction classic The War of the Worlds, airing them as a series of faux yet convincing news bulletins that interrupted existing radio programs to realistic effect.

Given Welles’ narrative voice talent, it’s no surprise that listeners in 1938 believed the planet was indeed being invaded by aliens. Panic was reported in the streets, forever sealing Orson Welles’ name as an avant-garde director who dared create dramatic interpretations of classics.

H.G. Wells’ novel of intergalactic war and (spoiler alert) inadvertent biological warfare is still as fresh as it was when originally written in 1898. Over a hundred years following its original publication, in comes author Stephen Baxter with his ambitious sequel.

Baxter does his best to capture the language as he tries to find a delicate balance between nostalgia and the worrisome progress of unimpeded modern technology.

Some may find that a sequel written by anyone but the original author would make for an opportunistic cash grab tacked onto the success of an already brilliant alien invasion classic. Others may fear that it wouldn’t do the source material justice, an insult to the genre.

Then again, as the book cover confirms, this tale was actually authorized by the Wells Estate, so there’s at least a sliver of legitimacy to be had, without the need to scream high treason against would-be authors creating unnecessary follow-ups. 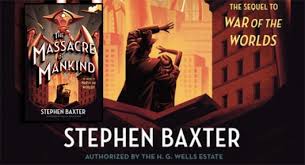 Book cover and art for tHE MASSACRE OF MANKIND by Stephen Baxter, courtesy Random House, 2017

Baxter’s sequel is set fourteen years after the original invasion of Earth, with Great Britain currently under quasi-fascist rule. The Martian enemy has learned from its mistake and now returns armed with knowledge and greater weaponry.

Baxter turns the dial back a few notches and brings his science fiction closer to “fiction” than “science,” keeping to language similar to the nineteenth-century scope of astronomy that Wells originally had inspired himself from. Imagine, travelling through space by way of a cannon!

In spite of the uphill battle faced by the author in light of his daunting task in creating a worthwhile follow-up, his use of clever cameos by famous people such as Winston Churchill jars the authenticity a bit, but still makes for a compelling read. A decent titles for sci-fi fans everywhere.

'Book Review: Massacre of Mankind a Compelling Sequel to War of the Worlds' has no comments