Our resident Book Editor Naomi Szeben recently had the chance to speak to popular author Grady Hendrix, author of such recent titles as PAPERBACKS FROM HELL  and the recently reviewed MY BEST FRIEND’S EXORCISM.

Here is the recent exchange by Skip It Or Love It with the author over topics ranging from the horror genre, casting thoughts on the novel’s characters and recurring themes in Hendrix’s works:

What do you think draws people to horror?

People are probably drawn to horror because they have undiagnosed personality disorders, but I wouldn’t know because I am smart enough not to get too close to those weirdos. They bite and have germs!

What inspired you to write about the publishing history of pulp horror?

To be honest, I just wanted a guide to all these lost paperbacks by forgotten authors I saw in used bookstores. Then I realized that if I wanted one, I’d have to write it myself.

How do you think e-publishing has affected the pulp horror genre?

There’s now an e-book for every niche of the horror marketplace, which means that books that cross genres are much rarer. On the other hand, it also means that if you’re really into vampire erotica there are self-published authors who are dedicated to meeting your needs, 24/7.

Which gothic paperback horror story was your favourite, growing up?

Any campfire ghost story or urban legend, whether it was a spirit looking for its golden arm or someone home alone putting her hand under the bed for the “dog” to lick. Like every kid, I knew that the most dangerous things were already inside our houses, and that every ghost had a finely-developed sense of revenge.

Do you think the public has become more prurient these days compared to the 70’s or ‘80’s parents?

Are you kidding? Horror in the 70’s, 80’s, and early 90’s was way more intense than it is today. Try going out today and publishing the touching tale of killer reanimated abortions, or the story of a resort in Big Sur run by Nazis who enslave their Jewish guests and force them to work on their marijuana farm, or a book about a band of gay Native American zombies out to kill all white people and prepare yourself for savage rejection. But in the 80’s, those books were par for the course. 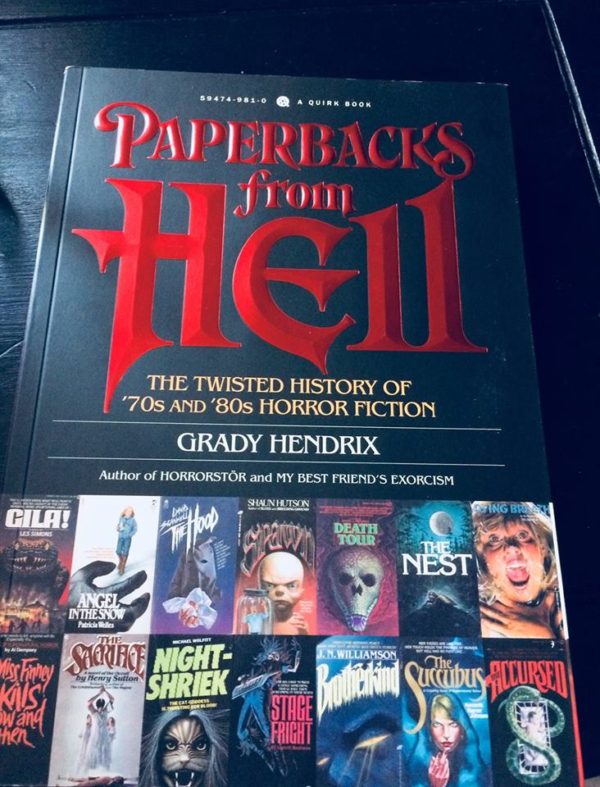 What was the name of the first horror book that every truly scared you?

I don’t think I’ve ever been scared by a book. The only written material I can remember terrifying me were the newspaper reports about the secret Satanists running daycare centers during the 80’s Satanic Panic. The fact that these ridiculous accounts of bogus Satanism were being taken as true and printed as fact made me feel like the world was spinning out of control.

If you had a say in casting a film or mini-series version of My Best Friend’s Exorcism, which current actors would you see play the following roles: Abby, Gretchen, their parents, Margaret and the Lemon Brothers? 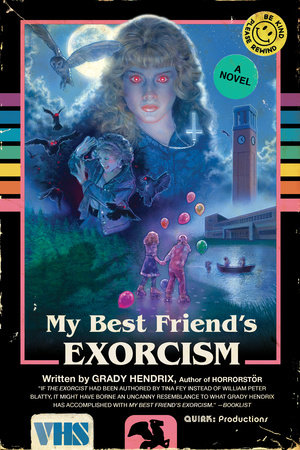 The hardcover cover depicted a high school yearbook, featuring possessed Gretchen with her back to the camera.  Why the change from yearbook to VHS cover?

Only a totally lame high school would have published a paperback yearbook, so we needed to do something different, and Doogie Horner, the art director at Quirk, had the brilliant idea to do the VHS cover. There wasn’t really time to pull it off but he leapt in with all four feet and made it happen.

The teen drama feels very real and relatable in My Best Friend’s Exorcism. What teenage experiences did you draw from to create the bond and dialogue between Gretchen and Abby?

That’s pretty much my life in high school. Everything is based on people I knew and things that really happened. I just sat down with all my old diaries, and letters, and photos, and read them again, copied the letters over so I could remember what it felt like to write those sentences, and spent a lot of time away from social media, just remembering what things were actually like in high school and not what I’ve convinced myself they were like.

Why did you chose to name the demon Andras? Any demonology references?

Andras is a Marquis of Hell and one of the 72 demons named in the Ars Goetica in the Lesser Key of Solomon, a 17th century grimoire. He’s associated with disruption and discord and he rides a wolf. In other words, he’s a badass.

What inspired you to choose owls as the demon’s heralds or familiars?

Andras has the head of an owl on the body of a man. That settled it.

Charleston and Bible-thumping are huge themes in this; I’m surprised that Reverend Jim Bakker and his wife, Tammy Faye didn’t make a cameo. What are your thoughts on evangelical presences in the US?

Jim and Tammy Faye Bakker aren’t really very Charleston-ish, they’re way more associated with upstate South Carolina and a nice family like Gretchen’s would have seen them as unforgivably tacky and redneck. 1988 was also the year the PTL Club scandals broke and so he’d already left the PTL by the time the book starts. I don’t have any bigger comment on evangelism, though. Life is hard. Whatever gets you through your day is okay by me.

Satan and hellishly crowded public spaces are recurring leitmotifs. Why these themes?

Satan’s great. I love the idea of a big red guy who’s the king of hell and is devoted to being a jerk. Also, he’s done that job for centuries without any hope of retirement or promotion. It’s tough to be Satan. As for crowded public spaces, well, I live in New York City so to me every public place is crowded and annoying.

Do you feel Hell would be more like a high school or an over-crowded airport?

Over-crowded airport. At least in high school you know the teachers care about whether you live or die. Most airports just toss the unclaimed bodies they find at the end of the day out in a big pile past the runways for the feral dogs to eat.

'Q & A Time: An Interview with Grady Hendrix, Author of Paperbacks from Hell and My Best Friend’s Exorcism' has no comments