With a considerable budget, a veteran fantasy and sci-fi helmer like Steven Spielberg and a pro special effects house like ILM, it was a foregone conclusion that this cinematic adaptation of Ernest Cline’s clumsy but earnest 2011 novel would dazzle its audience with its torrential display of pop culture references. And boy does it ever.

While the narrative and character development take a back seat to the visual output, Ready Player One may very well become one of those party games where one must find all of the Easter Eggs hidden within each frame.

Better stock up on snacks and drinks. You’ll be at this a while. 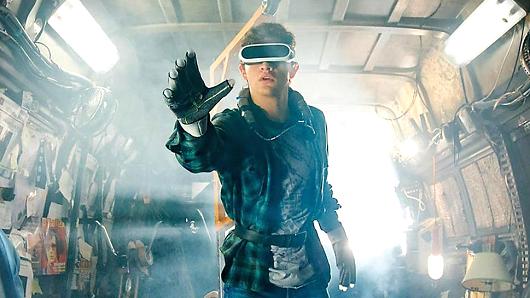 The year is 2045: the planet is polluted and cluttered and the majority of humanity spends its days in the OASIS – a virtual reality universe in which one can look like pretty much anything or anyone they want via their avatar, not to mention drive amazing vehicles, use cool weapons and have great abilities – if one has enough crypto-currency to acquire it.

When OASIS co-creator Jimmy Halliday (Mark Rylance) dies, he leaves behind a recorded message to all users: three Easter eggs are hidden within thie virtual world, and whoever gathers all three stands to inherit his fortune and gains ownership of it all.

With a greedy corporate CEO (Ben Mendelsohn) seeking to take it all in the name of monetization and global profit, the game is afoot, with the creative “Gunters” (i.e. Easter Egg Hunters within the OASIS) looking to beat the evil IOI Corporation to each Egg, ensuring that the virtual plane stays available to all who wish to escape from everyday life. 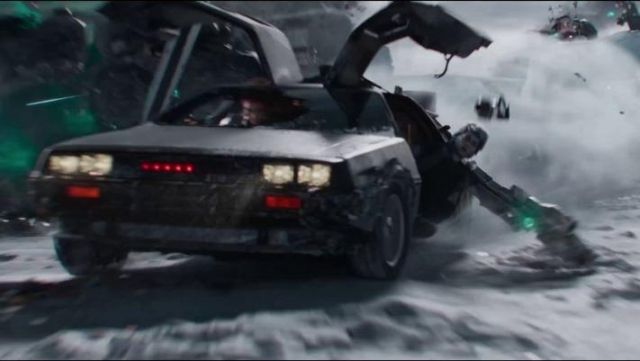 Parzival drives his DeLorean during the final battle in READY PLAYER ONE, Courtesy Warner Brothers, 2018

Steven Spielberg readily busies himself with keeping the plot centered on themes of regret, redemption and human values over artificial ones, however the film’s visuals are overwhelming and fantastical enough to lose sight of its emotional center.

Granted, we are encouraged to root for a blooming romance between Parzival and Art3mis, that is, when we’re not busy counting the hundreds upon hundreds of visual cues thrown in by the screenwriters and the FX wizards behind this lengthy adventure.

Young viewers won’t likely understand or appreciate the majority of said pop culture references stemming back to the 70s and 80s (I personally lost track after counting about 150 or so); despite its torrential influx of myriad references, Ready Player One will no doubt remind you of a Willy Wonka and the Chocolate Factory type quest, albeit one for the electronic generation. This is a given, including the studio’s inclusion of a remade “Pure Imagination” theme in the film’s multiple teaser trailers, an obvious nod to the 1970’s classic starring Gene Wilder, who had been approached by the producers about starring in this project in the Halliday role, prior to his passing.

The movie stars mostly unknown (or less famous) actors, with the notable exception of the OASIS’ creators (namely Rylance and Simon Pegg) as well as habitual villain Mendelsohn, who we’ve loved to hate in Rogue One: A Star Wars Story and The Dark Knight Rises, among others.

With its peppered melange of corporate greed, the importance of not getting lost in the online world (do I sense a nuanced message destined for Facebook overusers?) when there’s much to be gained in the physical one, Ready Player One is a mixed, uneven bag of tricks.

If anything, I can predict it will go down as one of the highest selling Blu-Ray films of the next decade, to be watched at parties as a “spot as many references as possible” drinking game for the ages.

Shall we play a game?

'Now Playing: Spielberg’s Ready Player One The Most Ambitious CGI-Intensive Project to Date' has no comments