In the world of television, four years may seem like forever and a day between original shows and spin-offs.  Or, in the case of revivals (think Murphy Brown, Will & Grace, etc.), it might seem like no time has passed at all.

In the case of Kurt Sutter’s Mayans MC, the anticipated follow-up to his highly praised biker drama Sons of Anarchy, it truly feels good to go home again, albeit in a different club and from a very, very different perspective. 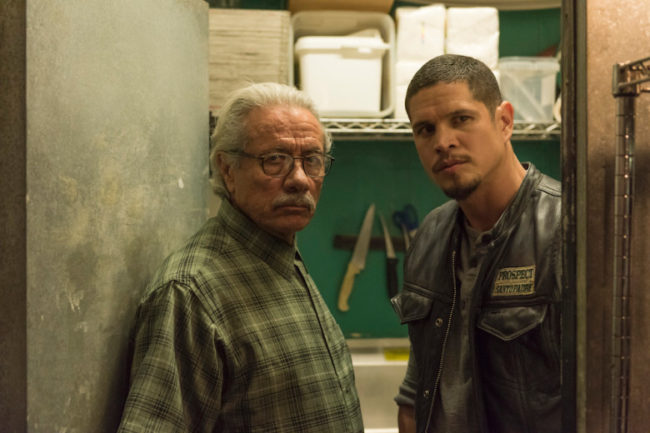 Set roughly two and a half years after the end run on Sons of Anarchy, Mayans MC shifts the focus to the titular rival gang, or at least one of its chapters situated near the Mexico/U.S. border.  Rather than focus on its leader and his leadership test running a successful criminal organization, the point of view shifts to that of a prospect with the club, a young but smart up and coming man named Ezekiel “EZ” Reyes (JD Pardo, The Twilight Saga), who’s hoping to be patched in as a full-fledged member so he can join his older brother Angel (Clayton Cardenas.)

The secretive motivations behind EZ’s ambitions are shrouded in mystery for the better part of the pilot episode, but suffice it to say that not all is as it seems with EZ or the club he’s eager to climb up within; internal strife is rampant, power plays always lurk at the slightest sign of weakness, and danger is ever-present in this lucrative but deadly world.

To complicate things, EZ’s former flame Emily (TV’s The Tudors) is now married to the Galindo Cartel’s successor (Danny Pino), who basically dictates most of the Mayans’ plans and directives as part of his growing empire.

Watching this series of events from the sidelines with doubt and reservations is the Reyes patriarch Felipe (Edward James Olmos, Blade Runner, TV’s Battlestar Galactica), who tries to guide his sons the best way he knows, from behind the counter of his local butcher shop.

What is EZ’s mission? What is happening with the Santo Padre charter of the Mayans club? Is war brewing with other clubs, or withing the club hierarchy? Creator Kurt Sutter hopes to answer this and many other questions over the ten episode first season. 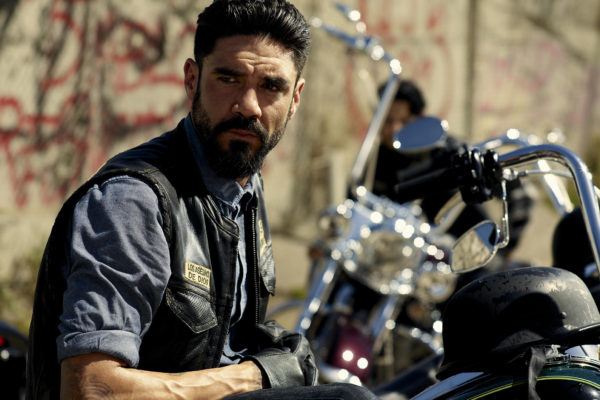 I’d be lying if I said it didn’t feel good to revisit Sutter’s fictional world of biker club intrigue and violent passion that worked so well in the original SOA run, which itself was a modernized take on Shakespeare’s Hamlet, right down to the Claudius/Gertrude angle, via a biker club setting.

Like a well-worn kutte (the emblem-adorned sleeveless leather jacket worn by patched in full-fledged club members), that universe and complicated dynamic falls right back into place, especially with a guest appearance by SOA regular Emilio Rivera as Marcus Alvarez, leader of the Oakland Mayans charter, who’d often butted heads with the Sons over seven seasons.

The sheer number of clever reveals within this pilot seems ambitious even by Sutter’s high standards, however thanks to sharp editing, a comfortable narrative pace and a group ensemble of very capable Latino actors, this project looks very possible from the get go, a promising successor to an already popular franchise.

JD Pardo plays it cool as EZ, a gifted, calculating thug with a complicated past now back to haunt him, forcing him to weigh the choices he’s given versus the ones he’s forced into. Edward James Olmos exudes Yoda-like wisdom in every scene. It’s too early to tell what back story exists for Felipe Reyes, but it’s certainly one to look forward to, like a living version of John Teller’s journal, albeit one you can refer to for wise counsel when the crap truly hits the fan.

Danny Pino plays the cartel leader with a double life (ruthless drug lord vs caring family man) with panache while Sarah Bolger brings a certain Gemma-like ferocity to her character, a once lovestruck girl whose life history has taught her to marry up and take control of her life. An interesting brief flashback even has her crossing paths with Katey Sagal’s Gemma Teller in a brief cameo.

The rest of the Santo Padre charter fills up quite nicely, with several colorful characters showing interesting personality traits, like the Sons in the original series. Clayton Cardenas acts as an overly ambitious Icarus-type rank climber whose goals may exceed his capacity to survive.

Below, a behind the scenes look at the series and its cast members:

I keep referring back to the word “promising” while describing this show. Kurt Sutter’s passion in storytelling was obvious during his seven-year run on his SOA series. The high level of intrigue and risk seems just as possible with this show, with a few more twists and turns thrown in.

Much talk has occurred since the end of the previous show in 2014, about a possible prequel tentatively called The First 9, a flashback tale of the founders of the Sons empire. While that project sits on the back burner in whatever stage it stands at, we should be more than happy to get a second look at the Sutterverse from a refreshing angle, and hopefully so for six more seasons to come.

'TV Review: Mayans MC Brings the Kurt Sutter Magic Touch Back to TV' has no comments