A much anticipated sequel that was extremely high on hype but oh so short on delivery, M. Night Shyamalan’s Glass ended up being one of those projects fans had waited for in vain, only to be disappointed beyond belief by a flat story that never believed in its own powers.

About three weeks after the events of the film Split, in which we had learned of the existence of Kevin Wendell Crumb (James McAvoy), a man with 23 distinct personalities (not to mention a strong, wall climbing superhuman 24th menace called “The Beast”) who abducts girls in the Philadelphia area, secretive vigilante David Dunn (Bruce Willis, reprising his character from Unbreakable) sets his sights on locating this madman with the surveillance help of his son Joseph (Spencer Treat Clark) before he can injure or kill a quartet of cheerleaders.

Unbeknownst to him, a SWAT team sent by psychiatrist Dr. Ellie Staple (Sarah Paulson) has also been dispatched, to capture both The Beast and his opponent, as she believes their so-called abilities are just a by-product of their own delusions about thinking of themselves as super-powered people.

Confined to the halls and cells of the local institution for the criminally insane, Dr. Staple has sessions with Crumb, Dunn and Mr. Glass himself, Elijah Price (Samuel L. Jackson, also reprising his role from Unbreakable), hoping to convince them that they are nothing more than mentally unbalanced victims in need of medical help so to cure them of this delusion about their so-called abilities.

Of course, Mr. Glass will have none of it and decides to plot a devious plan to create a conflict, release the Beast against Dunn and ensure the world sees the battle, once and for all showing the world that super-powered people are real. 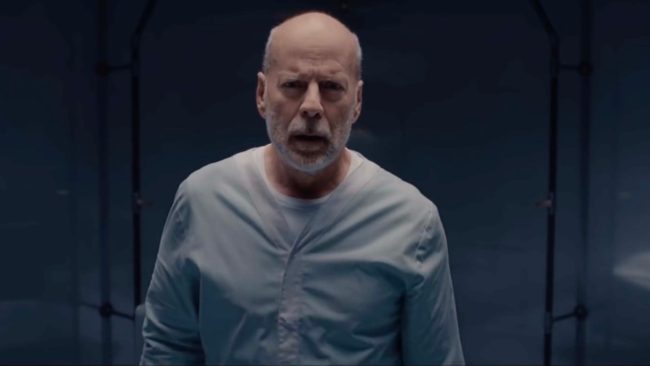 The film relies heavily on the back stories of its two predecessors, Unbreakable and Split, in order to bring back fan favorites in a comic-book style crossover. Alas, while Split only came out a few years ago, too much time has passed since 2000’s Unbreakable for us to really want to stay invested in what became of these characters.

Granted, it’s fun to see Willis and Clark as father and son working together using Dunn’s strength and invulnerability to beat up bad guys on the streets, but the process by which Shyamalan brings it all together feels forced and rushed, as if he were under a deadline to produce a story that hadn’t exactly been completed or planned out beforehand.

What we get as a result is a film with a handful of fight scenes, but mostly a lot of sitting around and talking, when all the audience wants to see is more of these power antics to allow its characters to live up to their names.

With the possible exception of James McAvoy, the rest of the cast members (including Anna Taylor-Joy as a survivor from Split) feel wasted, appearing on screen but being given very little to do other than sneer, talk or provide plot exposition. Even Sarah Paulson comes off as two dimensional, as if she were reading cue cards off side.

Despite the film’s obvious script and pacing issues, it’s still a treat to watch McAvoy entertain the presence of 23 different personalities within his expressive frame, effortlessly switching from one to the other from scene to scene.

A fine acting feat if ever there was one, to be sure, not to mention the display of his sheer physicality when morphing into his Beast persona, which is also a thing to behold, visually speaking.

The blu-ray disc offers a generous amount of extras, ranging from nearly a dozen deleted scenes (with or without intros by Shyamalan), multiple behind-the-scenes takes on the challenges of filming action sequences while respecting the film’s modest 20-million dollar budget, a number of smaller featurettes examining the movie’s color, sound and visual effects, as well as interviews with the cast and their thoughts on reuniting with their director nearly two decades later.

While it has become difficult to approach any film by Shyamalan without exclaiming Robot Chicken‘s “What a twist!” line, it’s even harder to watch a much awaited sequel with so much anticipation, only to realize the whole thing was done almost arbitrarily, just so a trilogy could exist, when the first two films held perfectly well on their own.

An ambitious final chapter that could have been relegated to oblivion right up there with unnecessary Star Wars sequels and pointless spin-offs, Glass is a paradoxical product that is both visually striking at times but utterly pointless and irrelevant, a rushed story that squanders its riches in search of a shock ending that never quite hits its target, while clumsily destroying the broad side of the barn behind it.

'Blu-Ray Review: Glass' has no comments