Moving forward with its latest trend of turning each of its animated box office successes into (arguably) unnecessary live-action remakes, the House of Mouse has produced a CGI-laden extravaganza in the form of Aladdin, bringing the streets and skies of Agrabah to vibrant life.

Is the finished product worth its wishes three? Well, yes and no. Read on, humble masters…

Charming street rat and thief Aladdin (Mena Massoud) makes his living stealing and selling wares from the pockets he picks on the daily in the streets of the capital city of Agrabah. When the boy has a chance meeting with Princess Jasmine (Naomi Scott) visiting the market incognito while posing as a handmaiden, Aladdin’s heart immediately melts for the beautiful girl, until he gets busted trying to visit her in the palace.

Meanwhile, the evil vizier Jafar (Marwan Kenzari) forces the young thief to retrieve a special item from a riches-filled desert hideout called The Cave of Wonders, which promises untold power. A few mishaps later, and Aladdin comes face to face with the Genie from the Lamp (Will Smith), who goes on to explain the need for three wishes, the rules that come with them and his own yearning to be free and human again.

With his magical friend as his wingman, Aladdin hopes to win Jasmine over, that is, unless Jafar’s dastardly plans to overthrow the Sultan (Navid Negahban) comes to fruition first. 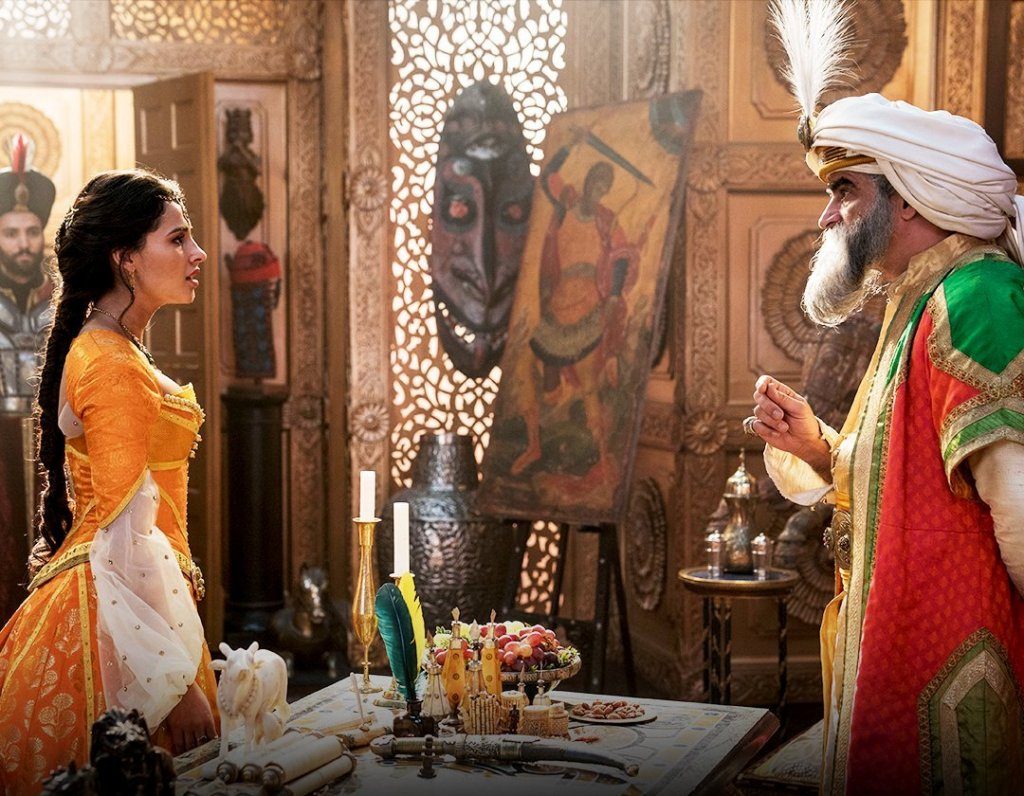 The film’s tone as directed by British action director Guy Ritchie, feels off and redundant for the most part. Sure, it’s fun to see yet another classic made into the equivalent of a lavish stage play, however it quickly becomes clear that the Sherlock Holmes and Lock, Stock and Two Smoking Barrels hasn’t spent as much time watching Disney classics as his target audience might have.

Despite a valiant effort to bring out the mustache twirling sinister side of Jafar, actor Marwan Kenzari doesn’t quite get there, coming off as a one-dimensional cookie cutter villain, one that cannot compete with original voice actor Jonathan Freeman, whose slow and measured timber brought heft to the character. Alas, Kenzari’s high-pitched whine destroys any illusion of dread or doom on the villain’s part.

While many originally scoffed at a blue Will Smith whose usual swagger could easily have taken the Genie character into uncharacteristic Fresh Prince territory, I’m pleased to report that the Men in Black actor successfully makes the character his own, without the need to try and emulate the late and unique Robin Williams, truly a tough act to follow. Thankfully, Smith retains the eccentricity while making the role his own, to great results.

British actress Naomi Scott nails every note of her singing performance as Jasmine, even bringing a much needed feministic note to the role via a new musical piece called “Speechless.” Scott’s vocal range easily matches Lea Salonga’s singing voice performance from the 1992 original.

As for Toronto-raised Mena Massoud, the handsome young actor finds the sweet spot in his portrayal of a loyal, clumsy but worthy diamond in the rough, in the titular role. A tall order, to be sure, but Massoud’s onscreen chemistry with Will Smith carries much of the story to its conclusion.

Let’s face facts, people: each of these live-action pieces have a built-in audience willing to revisit their favorite tales. It’s simply a matter of whether the source material holds true to its origin or whether it veers off course in a disastrously spectacular way.

In this case, with the exception of a watered down villain, the result is still pretty enjoyable, albeit a bit too familiar.

I know, some will find fault in remaking a great film, especially without that inventive Robin Williams vibe. That being said, there’s much reward in trying something new sometimes. Like a certain Greenbow, Alabama fictional character once said, “Life is like a box of chocolates: you never know what you’re gonna get.” Similarly here, if you learn to let go of the original script, you’ll find that this film might surpass your expectations, at least for the most part.

By Dominic Messier, Founder, Editor and Film Writer   Moving forward with its latest trend of turning each of its animated box office successes into (arguably) unnecessary live-action remakes, the House of Mouse has produced a CGI-laden extravaganza in the form of Aladdin, bringing the streets and skies of Agrabah to vibrant life. Is the finished product worth its wishes three? Well, yes and no. Read on, humble masters...     The Plot (For the dozen people who never saw the 1992 classic or never owned a VCR)   Charming street rat and thief Aladdin (Mena Massoud) makes his living stealing…
Now Playing: Aladdin
Now Playing: Aladdin
Dominic Messier

'Now Playing: Aladdin' has no comments