Just in time for the early summer period, here comes another hit by the Illumination Studio boys, those gifted computer animation guys responsible for notable titles like Despicable Me, Minions, Hop, Sing and all their related sequels.

A direct follow-up to The Secret Life of Pets, this somewhat uneven second installment nevertheless brings just as many laughs as it does adventure, all filtered through the perceptive lens of dogs, cats and various other mammals, as they live their daily lives alongside their favorite humans. 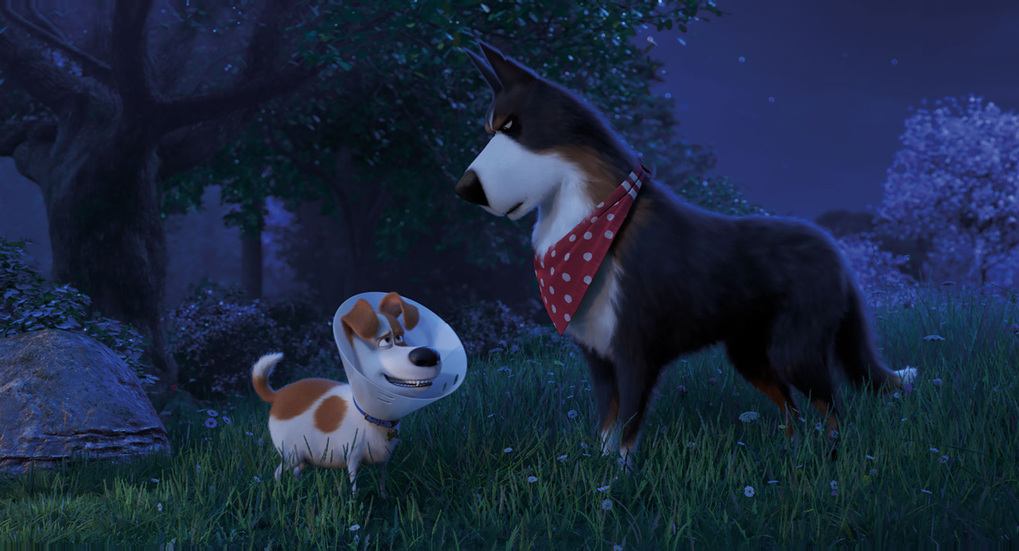 Max (voice of Patton Oswalt) and Rooster (voice of Harrison Ford) at the farm in SECRET LIFE OF PETS 2, courtesy Universal Pictures, 2019.

Life has gone on for pet owner Katie (voice of Ellie Kemper) and her loyal Jack Russell Terrier Max (voice of Patton Oswalt, replacing Louis C.K.), seeing how Katie has just had a chance run in with the affable Chuck (voice of Pete Holmes). Soon enough, the couple gets married and have a lovely son named Liam.

The ever-anxious Max has trouble coping with these changes in the family dynamic, in that he isn’t quite good with kids, but accepts little Liam quickly enough. Once the dangers of the busy city become a source of concern to Max towards his diminutive ward, stress-induced scratching begins, leading to an inevitable visit to the vet.

A prescription for a cone of shame and some fresh air is soon filled, and the family heads off to a family relative’s farm, where Max and Newfoundlander buddy Duke (voice of Eric Stonestreet) meet a no-nonsense, seasoned sheepdog named Rooster (voice of Harrison Ford, in his first-ever animated picture.)

It doesn’t take long for the wise elder canine to impart some valuable life lessons to the neurotic Max, resulting in a much stronger sense of safety and responsibility towards his favorite humans and their well-being in the modern world.

Meanwhile, back in the city, hyperactive Pomeranian Gidget (voice of Jenny Slate) has been tasked with safekeeping Max’s favorite bee-shaped chew toy. Of course a mishap occurs, where said toy ends up into feral cat territory a few flights below. Gidget enlists the help of Snowball the Bunny (voice of Kevin Hart) to retrieve said item, while news of a neglected white tiger cub being mistreated by a ruthless circus owner (voice of Nick Kroll) leads the city pets to mount a daring rescue to help the poor animal.

All of these stories eventually converge into one more city/countryside adventure where colorful pet personalities jump into action, for the sake of better pets everywhere. 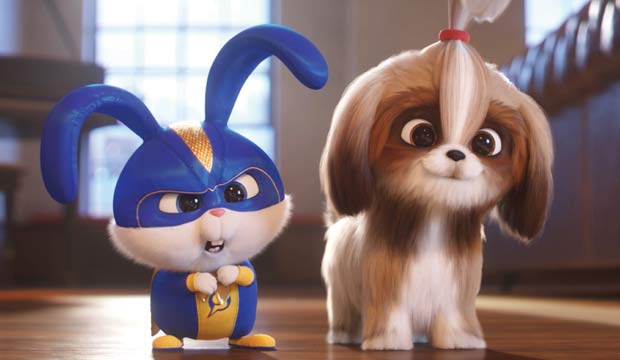 Snowball (voice of Kevin Hart) and Daisy (voice of Tiffany Haddish) jump into action to save a neglected tiger cub in SECRET LIFE OF PETS 2, courtesy Universal Pictures, 2019.

While it’s an enjoyable sequel in many ways, the plot format opted for here echoes more of an episodic TV show feel than that of a cohesive, single, theatrical release story line.

Granted, the film contains two very enjoyable subplots, but were it not for the flimsy third act, there easily could have been two fuller sequels at play here.

A villain named Sergey is introduced in the secondary plot as a violent circus owner willing to injure his charges for the sake of profit. The role never truly fleshes out in any positive way, turning Sergey into a generic villain. Sigh.

There are many elements worth enjoying in this harmless, albeit misaligned sequel. For one thing, it’s about time we got a taste of just how hilarious Harrison Ford can be in an animated role, though the character type isn’t exactly a stretch for the reputedly crabby Hollywood veteran. Still, Ford makes it work, turning Rooster into a mentor-type who simply cannot grasp or tolerate Max’s quasi-Woody Allen-esque neuroses.

Ditto Kevin Hart’s hyperactive and angry Snowball, a scene-stealing powerhouse in the secondary plot. Along with Tiffany Haddish, Jenny Slate and Lake Bell (as the ever oblivious tabby Chloe), the city-dwelling pets from the story’s main building turn their micro-adventures into feats of daring-do that could rival Mission Impossible.

Patton Oswalt effortlessly fills Louis C.K.’s shoes, following some recent legal trouble as seen in the media (let’s not revisit it here, shall we? Nuff said.) Oswalt finds easy chemistry with co-star Stonestreet and Harrison Ford in the first ha;f of the film, and makes you forget a switcheroo ever took place. Bless the animated film world, where voice illusions cover all blemishes.

Like most animated sequels, there’s always a risk of diluting the narrative quality, depending on the strength of the script in play. Most of said stories rely on strong leads and innovative additions, which is why Harrison Ford made a positive difference that tips this film’s assessment a bit past the halfway mark. Still, it would have been nice to see both halves of this movie mesh more cohesively, leading to a much stronger, less fractured tale.
But then again, animated films do have a way of blurring that fine line, doesn’t it? Woof woof.

'Now Playing: The Secret Life of Pets 2' has no comments