As a means to bring in some much needed reinforcement in the Infinity War saga, the folks at Marvel had decided to give us a throwback to a few decades ago, when none of the superheroes had yet gone public (except perhaps Captain America back in WWII) and alien life was just science-fiction to most of the population.

Enter Captain Marvel, an ambitious, feminist take on the hero genre, starring Brie Larson as a human warrior trained by  an alien warrior race after being rescued during an accident on Earth, only to be turned into a living weapon of unimaginable power. 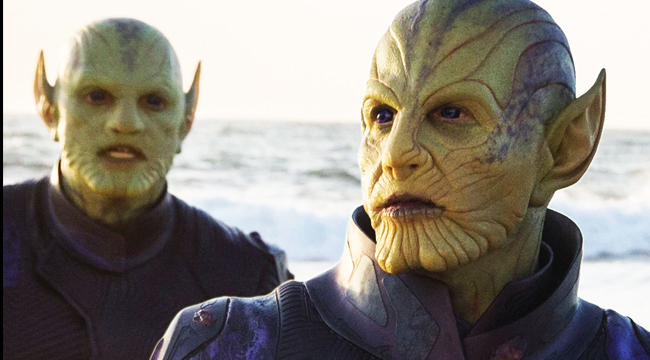 The Skrulls as seen in CAPTAIN MARVEL, courtesy Marvel, 2019.

The year is 1995, and Kree soldier Vers (Brie Larson) is having trouble dealing with nightmares while suffering amnesia about her past. After she gets captured by an opponent race of shapeshifters called the Skrulls, a mind probe into Vers’ past reveals she is from the planet Earth, where she was once an experimental test pilot presumed dead.

The Skrulls use this information to seek Earth out, possibly as a staging area in their war against the Kree. With her Starforce colleagues not far behind and S.H.I.E.L.D. agents Fury (Samuel L. Jackson) and Coulson (Clark Gregg) looking to assist the Earth-born warrior in understand her origins, Vers – or as she soon learns, Carol Danvers – seeks to solve both a galactic threat of unimaginable proportions while unveiling the truth about her force’s motives in the ongoing war. 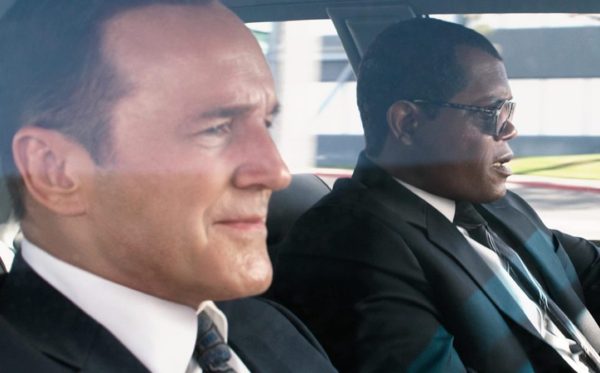 As a throwback piece set in the 1990s, the film does provide some respite from the super-powered barrage of films in the MCU. Granted, this one has a very powerful heroine at its centre, but its disconnection from the larger narrative — at least for now — makes for a very different film that might not everyone’s cup of tea.

Add to this the need to de-age some of its cast members to bring about an era appropriate look, makes Jackson and Gregg look at bit weird. And I’m saying this in a context where a race of aliens can literally shape shift into anyone they please. Still, there’s something disconcerting and odd about the CGI de-aging process, very much in the same way that it’s oddly creepy to see a CGI-assisted Grand Moff Tarkin or Princess Leia in Rogue One.

Also, while they might be considered a mighty galactic warrior race, not much is revealed regarding the Kree race and its origins, other than being a militaristic, advanced race of disciplined politicians and soldiers. Not the most charismatic bunch. At least the Skrulls have a bit more pizzazz. At least we can rejoice in what turns into a buddy-cop hybrid story set in the mid 90s, as the Fury/Danvers/Coulson trio take center stage in an otherwise dense storyline.

Despite its many flaws, Captain Marvel brings some much needed female empowerment in the MCU, where its distaff characters have often been relegated to supporting roles. Here, we find a no-nonsense soldier aware of her own destructive power levels, who chooses to use it for the greater good. Also, any woman that can stare down Thor (see Avengers Endgame) has got to be pretty badass. All in all, a redefinition of “Girl Power” for a new generation of young impressionable girls.

Also, any movie that contains a Flerkin can’t be all that bad, right? Just watch the movie, you’ll know what we mean by this.

Great visuals, some returning cast members from a handful of past Marvel films and just the right amount of appropriate humor, and we have a decent time at the movies, while we wait for more MCU projects. Besides, this film’s lead-in role into the closing Endgame chapter of the larger Marvel arc makes it essential viewing, if only so to tie up loose ends and fill in some blanks.

As with most of the Marvel combo Blu-ray sets, this one has all we need, including deleted scenes, a gag reel, a look at the Kree and Skrull races, a clever, retro-looking piece concerning Goose the Cat, an audio commentary by directors Anna Boden and Ryan Fleck, if that’s your cuppa, and a featurette on the physical preparation needed to fill in the shows of a Marvel hero, including physical and fighting training by key cast members.

All in all, Captain Marvel isn’t the most imaginative or original piece to come out of the hero factory, but it contains enough bits of trivia to complement the mythology’s nearly 80-year timeline. More of an add-on to the Infinity Saga than an essential bit of viewing, it won’t help you to consider this as a must-see, but it wouldn’t hurt to check it out, either.