There’s a great and illuminating scene in Steven Spielberg’s 1993 blockbuster Jurassic Park, where a certain fictitious chaotician named Ian Malcolm (brilliantly overplayed by Jeff Goldblum) confronts billionaire industrialist John Hammond (Sir Richard Attenborough) as to scientists being so busy with seeing if they could clone dinosaurs, that they never stopped to consider if they even should.

Which isn’t to say that Jon Favreau’s The Lion King is an amusement park gone horribly wrong, mind you, but there is something to be said about the quality of expression that comes from animated art that simply cannot be duplicated, no matter how much money and computing power goes into the project. 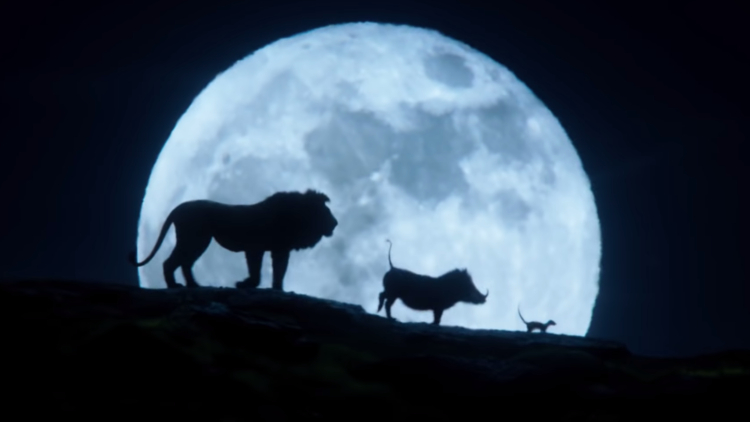 Simba, Puumba and Timon in a memorable time shift scene from THE LION KING, courtesy Disney, 2019

A nearly shot-for-shot remake of the beloved animated classic, this update to the 1994 summer hit doesn’t exactly reinvent the wheel. Granted, it still retains the Shakespearean nuances a la Hamlet, but mostly follows its predecessor while taking a few detours for the sake of individuality.

For those of you who’ve lived hundreds of miles from a video store in the 1990s or, say, internet for the last quarter century, here’s the gist: King Mufasa of Pride Rock (voiced once more by James Earl Jones) announces the birth of his son Simba to the entire landscape, unaware that his nefarious brother Scar (voice of Chwitel Edjiofor) is looking to get rid of the pesky young prince, so he can once again take his place as ruler, once his brother passes on.

Cut to various scenes where young and naive Simba trusts his mean uncle, putting himself in harm’s way until tragedy strikes and forces the young cub to run off in shame, until he befriends a pair of carefree loners (voiced by Billy Eichner and Seth Rogen) who teach an older Simba (voiced by Donald Glover) that while life should be lived by the problem-free philosophy of “No Worries”, that one’s path and destiny is often more important that a life of partying. 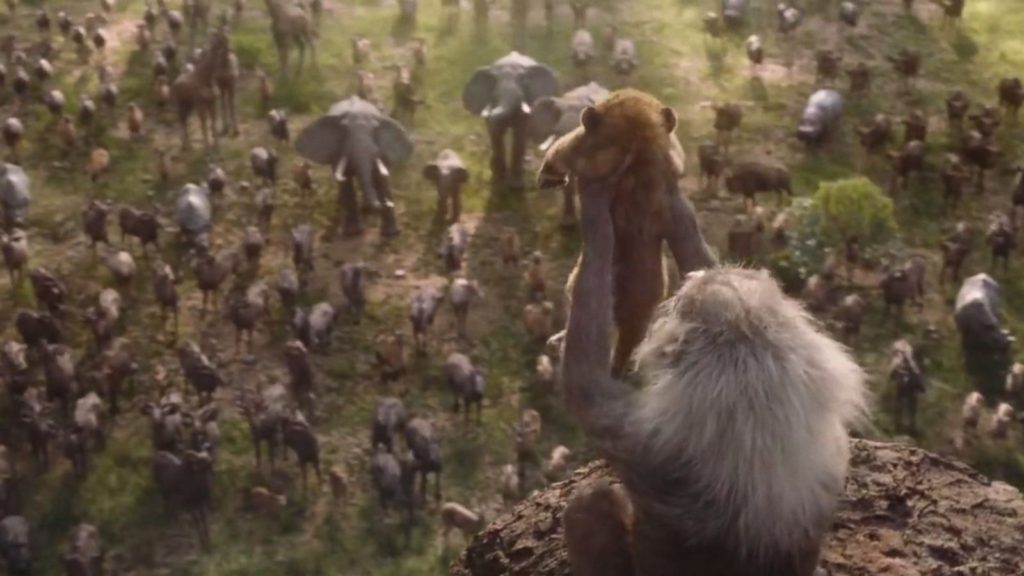 As ambitious and glorifying as this project might be, there’s no way to truly convey true emotion via computer-generated imagery. There’s a trick of the mind, one that simply cannot reconcile artificial images being used in a realistic context, that would trigger a similar response. Look up “Uncanny Valley” on Wikipedia or Google. It’s a thing.

Though the story still connects on some level, and the near entirety of the film is a technological masterpiece, what it amounts to is the equivalent of a lavish Disneynature documentary where celebrities offered fortuitous voice overs in all the right places. The animals’ eyes and facial structures simply don’t convey the same level of emotive heft as the animated source material, resulting in a very fancy, cool looking shell of a film.

Thankfully, none of the voice cast members even dare try to outdo their 1994 counterparts (though John Oliver does easily manage to surpass Rowan Atkinson as the pompous majordomo Zazu), each keeping with their respective characters’ motivational arch. It’s bittersweet to hear an older James Earl Jones jumping back into his classic role, but it doesn’t come off as exploitative in the least.

As for Chwitel Ejiofor, he knows better than to out-Jeremy Irons the performance out of Scar and manages to make the role his own without going overboard.

A viable choice for parents unable to decide what to take their kids to over a weekend matinee, The Lion King doesn’t bring anything new to the table, and lacks a certain…shall we say it….humanity to its CGI performances.

The computer scientists figured out they could.

Whether they should have is completely open for debate.