An ambitious sequel to an otherwise imaginative live-action reinvention of the popular animated 1959 Disney classic, Maleficent: Mistress of Evil tries way too hard to come up with any original idea, only to stretch too thin and crash land into a messy, convoluted mess that would require a colossal amount of fairy dust to recover.

Somebody hide all the spindles, quickly! 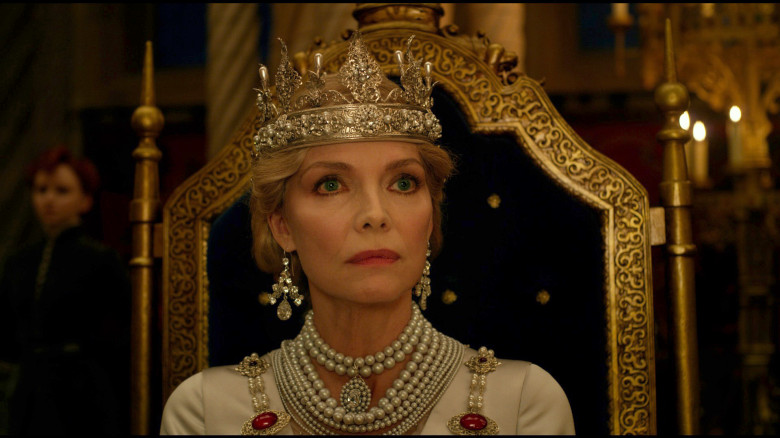 Five years have gone by since the iconic events of the first film, with Maleficent (Angelina Jolie) still protecting the Fae-populated Moors while remaining Princess Aurora’s (Elle Fanning) godmother. Aurora has continued her courtship with Prince Philip (Harris Dickinson), who has proposed to his love and hopes to introduce her into his family, King John of Ulstead (Robert Lindsay) and the devious Queen Ingrith (Michelle Pfeiffer.)

Tensions are high as Maleficent is opposed to a union between the two young lovers when it becomes quite obvious that Ingrith resents the Fae for past slights, and plans to launch a war after plotting a means to take control of the kingdom from her husband and frame Maleficent for crimes against the King. After the latter goes missing following a sneak attack by Ulstead’s forces, Aurora seeks to find a way to solve the mystery of her godmother’s disappearance while Maleficent gets rescued by a group of similarly horned Dark Fae hellbent on regaining a presence in the human world.

An inevitable battle ensues that may spell certain doom or reunification, depending on who comes out victorious.

While audiences often welcome a sequel to their favorite movie, such a plan must be developed with care so as to avoid coming up short on ideas to make any sense in both continuity and logic. In the case of this dubious sequel, it appears that much relies on its star’s ominous presence as a reformed villain whose change of heart spelled happiness for all ever after.

Alas, a half-baked script about revenge and political ambition mixed with a moralistic subplot about alienation

turns a potentially delightful follow-up into a chaotic mess that neither fully focuses on its titular character nor does it really allow for much of its colorful cast to truly contribute to the story with equal measure.

Characters are introduced only to be killed off without a real chance for the audience to connect, while too much time is spent following the machinations of a vindictive human queen whose slights by the Fae world are hinted at but never fully fleshed out.

The film’s rushed delivery of a half-dozen plot points come off as incomplete, leaving us with a CGI-laden pile of nonsense that fizzles halfway through the two-hour running time.

Jolie still manages to find her way back into the Maleficent role, but isn’t given much to do other than witness events and flap her wings, flicking her wrists to magick her way out of battles or awkward situations. Elle Fanning gets much of the heroic screen time, while Harris Dickenson’s prince (replacing Brendan Thwaites, too busy on TV’s Titans to reprise his role) barely makes a mark as the disappointed scion who witnesses his mother’s treachery as a quasi-bystander until it’s almost too late.

Michelle Pfeiffer doesn’t quite overact as the nefarious Queen Ingrith, but comes dangerously close to twirling a figurative evil mustache as the plot doesn’t even allow her a measure of double-cross or intrigue to spark any any intrigue as to her true motives. Her elegant regal accoutrements may very well have come with large logos marked “Token Villain”, her character flaws advertised larger than a neon-sign or banner.

As for the remaining cast members such as the fairy godmothers, the leaders of the Dark Fae and Maleficent’s loyal assistant Diaval (Sam Riley), all get their turn in the forefront, but all of them all too brief, again giving the film a sense of forced, rushed stampede to the end credits.

What magic existed in the 2014 film dies away in this ill-conceived sequel that should have remained in the Moors happily ever after.

As is usually the case with Disney releases- rest assured that the Blu-Ray/DVD Combo release comes complete with making-of featurettes that are necessary to make much sense of the convoluted plot, an outtake reel, extended scenes and the ubiquitous digital copy for all of your on-the-go needs.

Like mythical creatures of old, this forgettable sequel is sure to be forgotten by the masses as a visually impressive ball of narrative confusion meant to dazzle the audience, falling way short of its intended target and left behind as a flawed product rushed into theaters when it probably shouldn’t have been released in the first place.

'Now on Blu-Ray: Maleficent: Mistress of Evil' has no comments