As one of the few films to be released before the global pandemic, Chris Sanders’ first live-action film based on Jack London’s timeless tale of a dog’s adventures as he is thrust into the Northern wilds during the 1890s, didn’t get its fair shake at the box office, not to use a canine pun.

Which is a shame, given that, with its scenic and diverse intermix of CGI and live-action, helped along by a willing cast, The Call of the Wild checks off all the boxes in the makings of a tale of survival, independence and personal growth, as seen through the eyes of a loyal pup who went on to find himself and his purpose in the wintry North. 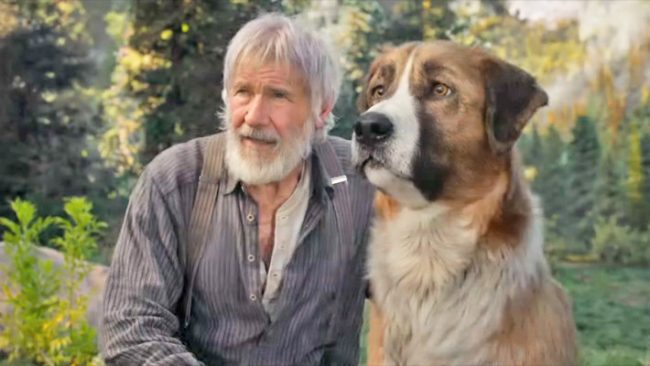 Harrison Ford (seen here with Buck) is John Thornton in THE CALL OF THE WILD, courtesy 20th Century Studios, 2020.

The 19th Century is slowly drawing to a close, and North America is caught up in the Gold Rush fever, with countless prospectors headed to the frozen climes of the Yukon in search of riches.

Buck, a rambunctious St-Bernard/Scotch Collie mix, is living with his family and master in a quaint California town, until he’s kidnapped one night to be sold off into dog sled existence up North, where sled labor is hard to come by with the shortage of canines.

The beleaguered Buck is beaten and mistreated until he is obtained by benevolent mail courier Perrault (Omar Sy) and his companion Françoise (Cara Gee), in an attempt to have their pack of sled dogs make the 500-mile mail run journey under deadline, or the first time.

After several successful runs, the mail route ends due to the innovation of the telegraph, forcing the sale of Buck and his canine companions to a selfish and cruel man named Hal (Dan Stevens), a ruthless individual with his sights set on gold riches. Further mistreatment is avoided when a solitary outdoors man named John Thornton (Harrison Ford) steps in to save Buck from potential torture, leading the pair to head off into unknown territory, leaving civilization and its troubles behind.

It’s out there that both man and dog discover themselves and how to make peace with their past, all while learning the importance of what truly matters in life. 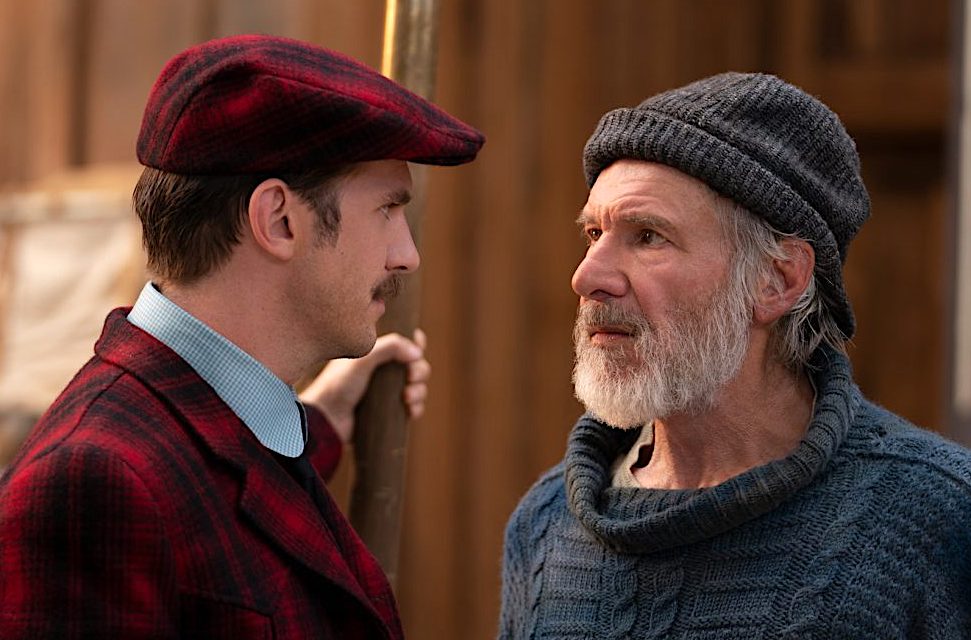 Dan Stevens as the villainous Hal and Harrison Ford as John Thornton in THE CALL OF THE WILD, courtesy 20th Century Studios, 2020

Though this remake’s narrative has its share of tweaks and changes in order to allow for a family-friendly experience, there’s just enough here to make the film passable, thanks to impressive CGI-work on the Buck character, which allowed not only a wider range of emotion, but also avoided questionable practices of late by Hollywood standards, following a string of dog-based flicks featuring live canines.

A gruff voice-over narration by Harrison Ford helps glue the story together, despite a cast of characters that with few exceptions lack nuance. Heroes and villains are as obvious as can be (Downton Abbey‘s Dan Stevens even sports a very twirl-able dastardly mustache) and much of the running time tips in favor of the Buck/Thornton dynamic, thanks to the undeniable chemistry between screen veteran Ford and great work by motion capture actor Terry Notary, who helps convey a wide scope of emotion through the illusion of CGI graphics which only enhance the experience, here.

Marvelously generated vistas of the Great North help sell the familiar story, a pretty decent try by a filmmaker, writer and artist who up until now was mostly for his animated pedigree, with titles like Lilo and Stitch, How to Train Your Dragon and The Croods.

Through a different type of animation, Sanders succeeds where so many on-set trainers and Benji-wranglers had failed before, that of managing a believable and endearing interaction between man and dog, without falling back on the master/puppy dynamic.

While we weren’t able to obtain a physical review copy due to the restricted Covid-19 measures in place, we can confirm that the Blu-Ray offers some insightful glimpses into the physical work done by Terry Notary in conveying canine behavior, while another feature offers a look into how the producers managed to digitally recreate much of the backdrop of this period piece, despite having never left the California production area.

Omar Sy and Cara Gee and a pack of dogs in THE CALL OF THE WILD, courtesy 20th Century Studios, 2020

A worthwhile escape from our current woes, giving us a chance (albeit a CGI-laden one) to hearken back to exploration days, The Call of the Wild won’t be reinventing the genre by any stretch of the imagination, but it’s sure to lighten your mood by introducing an expressive four-legged hero whose perseverance and determination only outweigh his empathetic good-naturedness.

'Now on Blu-ray and VOD: The Call of the Wild' has no comments