By Dominic Messier, Founder, Editor and Supporter of All Life, Both Synthetic and Organic

So, here we are, True Believers! After a semi-long delay caused in part by the global pandemic, not to mention an ambitious slate of Marvel Cinematic Universe (or MCU to the uninitiated) projects on the go, let’s welcome the first installment in Phase 4: WandaVision!

Given that we’ve already treated to no less than 23 films in the franchise’s 12-year long history, and also given the somewhat hefty and sobering exercise that was Avengers: Endgame in the Spring of 2019, it should come as no surprise that we’d be encouraged to sample a palate cleanser of sorts as we enter this new phase, one that will both delight loyal fans and raise a number of interesting questions.

But first, let’s have a look at what’s in store…

Though no rhyme or reason is given as to how or why we are thrust into a veritable hodgepodge of TV styles ranging from the 1950s all the way up to the end of the millenium, suffice it to say that we are following Avengers member Wanda Maximoff (Elizabeth Olsen) and the nigh-indestructible and also very-dead (?) Vision (Paul Bettany) as they appear to live out a blissfully married life as a couple in suburban Westview, U.S.A.

Both aware of their powers and abilities yet both mindlessly playing along with each episode’s tropes and era-appropriate sitcom-esque conundrums, it isn’t long before the pair start to realize that something is afoot, an obvious point since we the audience all know where these characters left off (or didn’t, given their history.)

So, the question then becomes: how are these two moving from gimmicky situation to another, from a decade onto the next, all the while remaining unaware of how or why this is all happening? That, dear friends, is half the magic of this limited Disney Plus hosted series, one which infuses humor and fun into an otherwise emotionally packed cinematic universe. 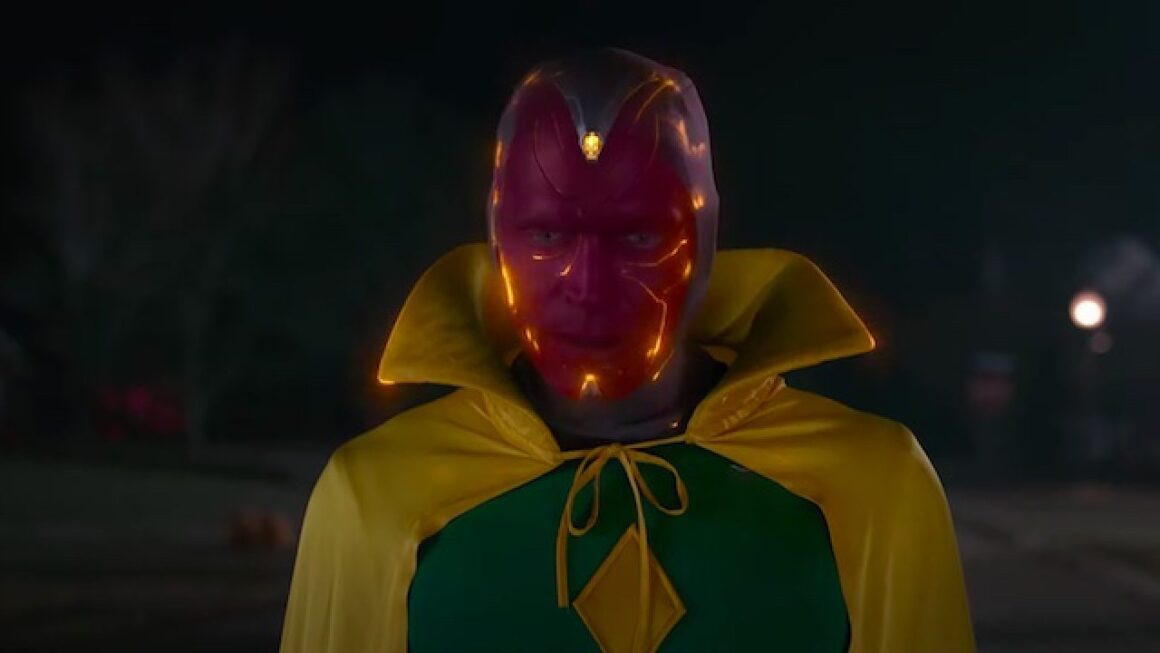 Paul Bettany in an 80s era-inspired version of the character’s uniform from Marvel Comics, in WANDAVISION, courtesy Marvel Studios, 2021

Right off the bat, several questions are raised: Where are they? How is Vision still alive, given that (spoilers!) he met his fate in 2018’s Infinity War? Is this all a fevered dream or psychosis made incarnate by the grieving Wanda, unable to handle such a personal loss?

Well, perhaps. Some of the episodes’ endscenes do hint at a larger phenomenon at play, one that is contained yet occurring in the real world, at least in the MCU version of it.

Hardcore fans can easily speculate from there…could it be that the powers-that-be decided to inject some more obscure lore from the comics, such as the heavily influenced TV Mojoworld? (Seriously, Google it.) Did Wanda have a day off and fell asleep while opting to channel surf a bunch of older, vintage shows,  her subconscious yearning for the nuclear family dynamic offered by such mid-century American sitcoms? Who knows at this point.

What is undeniable is that the producers have spared no expense creating richly detailed settings for each installment, faithfully adapting each soundstage to reflect shows like I Love Lucy, Bewitched, The Brady Bunch, Roseanne and so on. This comes as a veritable treat for older fans who’ve fondly lived through such material in the last fifty years.

Plenty of inside jokes are thrown into the mix in the form of Marvel-inspired TV commercials (Stark Industries toasters, Hydra brand watches, etc.), though it’s unclear after three of the episodes previewed for this article, whether said ads offer cryptic clues as to the real reason behind their presence in serialized settings of yore.

The show offers a goofy but welcome laugh track, one which may denote a surreal aspect to Wanda and Vision’s predicament or may simply be part of the larger illusion in action. Etiher way, it does infuse the series with some much needed levity, also allowing both leads to play to their untapped comedic strengths, something they sorely lacked in their otherwise clinically morose personas in the film universe.

The episodes’ production values are at par with their big tentpole film siblings, while still keeping to a more modest miniseries format and each corresponding era.

With some great questions being raised with each chapter and with hints of returning supporting characters involved in this unusual mystery (a keen eye can spot Kat Dennings’ Darcy Lewis (Thor) and Randall Park’s Jimmy Woo (Ant-Man and the Wasp) in the trailers), WandaVision offers much promise and is guaranteed to entertain. We can’t wait to see how this will tie into or affect other planned Phase IV titles.

With the majority of audiences self-isolating in pandemic quarantine and yearning for some much needed diversion, this show is a soothing balm that will keep us well-fed in our Marvel-infused diet, at least until the next big movie release hits theatres or VOD.

(WandaVision is available exclusively on the Disney Plus streaming app, with the first two episodes being made available January 15th, with a new episode airing weekly each following Friday.)

'Now on Demand: WandaVision a Great Trip Down TV’s Memory Lane' has no comments