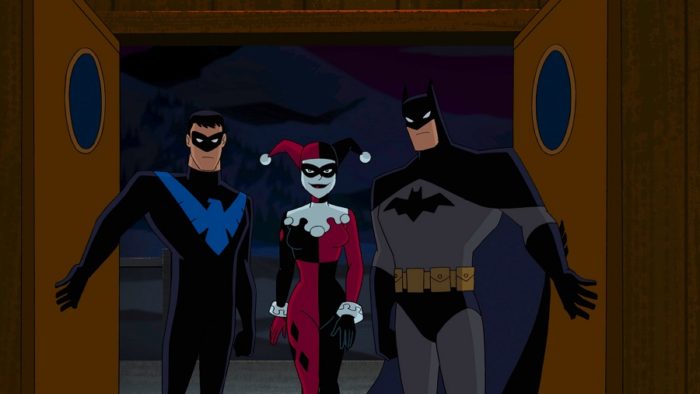 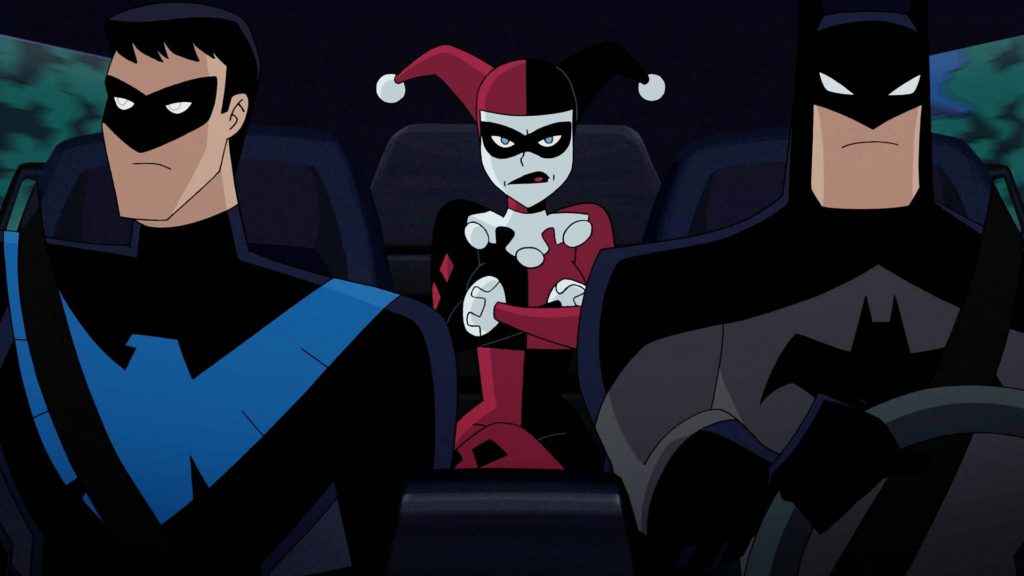 Harley Quinn isn’t above passing gas inside the Batmobile to get her way, in BATMAN AND HARLEY QUINN, courtesy Warner/DC Animation, 2017

Word has it that the ecologically conscious criminal Poison Ivy has paired up with her similarly powered ally Floronic Man. Together, they seek to find the correct formula of marsh waters and chemicals that gave birth to the vegetation-based, god-like entity known as Swamp Thing, so to use said mixture to turn all of humanity into plant people.

When Batman learns of this new threat via the A.R.G.U.S. intelligence agency, he and Nightwing seek out newly paroled Harley Quinn, who hopefully knows where her former BFF Ivy may be headed to next.

The adventure becomes a race against the clock as the nefarious pair seeks to achieve global overthrow via their concoction.

The dynamic duo — make that temporary trio – must race to the Southern States to Swamp Thing’s stomping grounds — aka The Green — in time to thwart their foes, assuming that they don’t kill each other by getting on each other’s last nerve along the way. 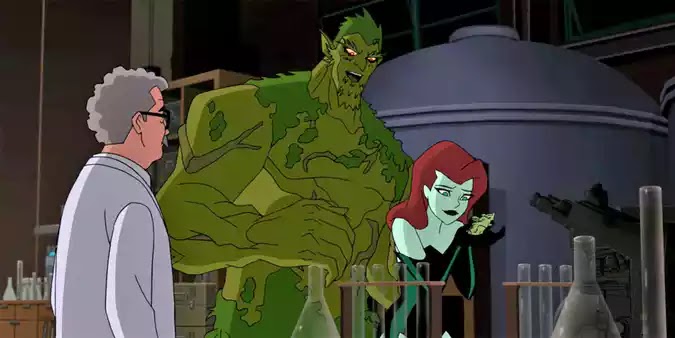 The premise of this story is sadly pretty basic, even by Batman: the Animated Series standards. The piece seems designed to draw the most giggles out of the odd coupling between Harley and the Dark Knight (and Nightwing, of course.), and not imply or impart any sense of ominous doom at the thought of humanity’s demise.

The mere mention of Swamp Thing as a secondary character in passing by the last act seem unjust given the character’s rich history, relegating narrative focus towards the ubiquitous Poison Ivy and less frequent baddie Floronic Man, aka Jason Woodrue. Give me a Swamp Thing animated series any day.

The film’s silly dénouement feels lazy and facile, when the heroes could have gone that route all along. Cop-out or writing fatigue? You decide. 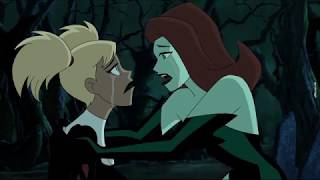 When all else fails, turn on the waterworks…Harley Quinn calls to Ivy’s better side in BATMAN AND HARLEY QUINN, courtesy Warner/DC Animation, 2017.

Chief among the pluses for this release is the return of THE Batman voice de rigueur, Kevin Conroy. Much of the last few years of releases had Jason O’Mara sitting in, but the film has at least that much more oomph with the most familiar voice under the cowl.

The Big Bang Theory’s Melissa Rauch (who plays Bernadette on the show) fills in as Harley, offering a pretty decent rebellious approximation of the character, similar to offerings by Tara Strong and Arleen Sorkin in years past. Voice work stalwarts Kevin Michael Richardson and John Dimaggio fill in the blanks here and there as villains, godlike entities and background players galore. Also, series regular Loren Lester’s back as Robin/Nightwing.

Those of you with a keen eye for detail will find a few trivia nuggets in the henchmen barroom, with two Adam-West era Catwoman thugs dancing the Bat-tusi, right down to their striped yellow and black uniforms.

Harley decides to get frisky with the Boy–AHEM –Man Wonder, in BATMAN AND HARLEY QUINN, courtesy Warner/DC Animation, 2017

The extras on here are frankly nothing to write home about, with a couple relevant episodes from Batman: TAS thrown in for background history between Ivy and Harley, while also throwing in a bunch previews for future releases. A brief piece on veteran Nightwing voice actor Loren Lester is available.

'Now on Blu-Ray: Batman and Harley Quinn Play Up Global Catastrophe for Laughs' has no comments