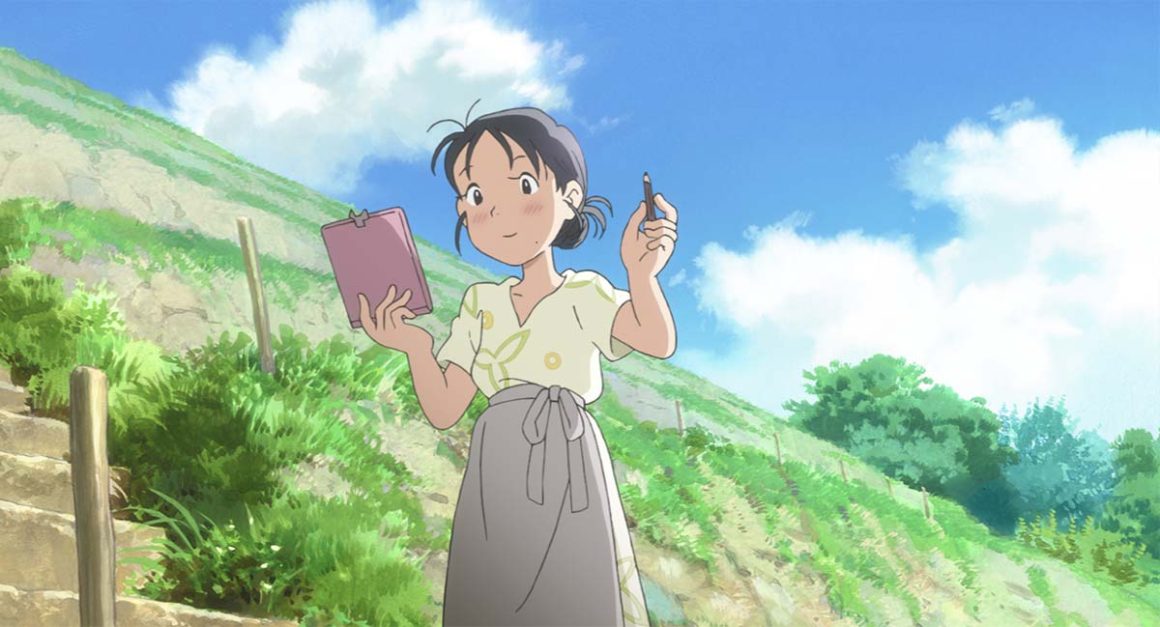 Seeing this film as a refreshing alternative from the popular but nonetheless brilliant Miyazaki fantasy tales of decades past, I found myself apprehensive whilst approaching In This Corner of the World, a period piece set perilously close to the fated August 6, 1945 historical nightmare that was the first atomic bomb drop over the city of Hiroshima, an event which effectively ended World War II.

But how did the military buildup affect civilian life on the Japanese side of things? This gem of a film seeks to offer an ambiguous tale as seen through the eyes of the well-meaning protagonist, a young girl who sees her life change in a monumental way after she is sent off to a local family in an arranged marriage.

A well paced family drama layered with gentle reminders of the need for sense and duty while also reminding the audience of the impending horror of known 20th Century history, the film steers away from military history while always keeping its harsh presence in the background, indirectly affecting the story’s players in sobering ways.

In fact, the narrative takes place at the opposite end of the spectrum, focusing on peasant families and their adherence to tradition, arranging unions between youths so to ensure a good marriage, and keeping with family values of respect and reverence. All the meanwhile, international conflict looms over all.
Based on a manga tale by Fumiyo Kouno and brilliantly directed by Sunao Katabuchi, the film majestically draws strength from the interpersonal, unassuming drama of every day rural life, from the scarcity of basic necessities during wartime shortages right down to the importance of community. 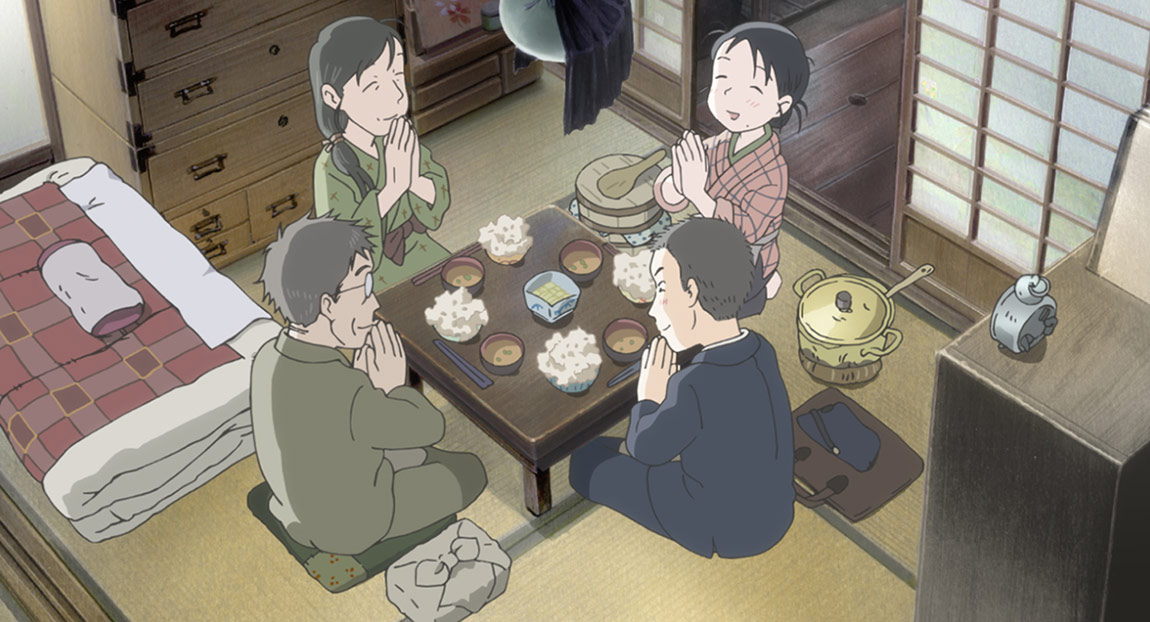 A family meal within the story of IN THIS CORNER OF THE WORLD, courtesy MAPPA, 2016

Young Suzu is a child who in later teen years gets promised then married to the son of a local family. While the film’s editing doesn’t quite lend itself to a friendly chronological pace (too many jumps from era to era with an unchanging look to our heroine), the story nevertheless hopes to follow her year by year, as she adapts to the different dynamic of her new family.

Whether it be coping with an arch and ill-tempered sister-in-law or a dangerous curiosity as to the local goings-on (much to the chagrin of local military authorities), Suzu is an embodiment of wartime innocence, an apolitical soul who sees good in everyone, and wonder in the distant cannon sounds and ominous fly-bys. 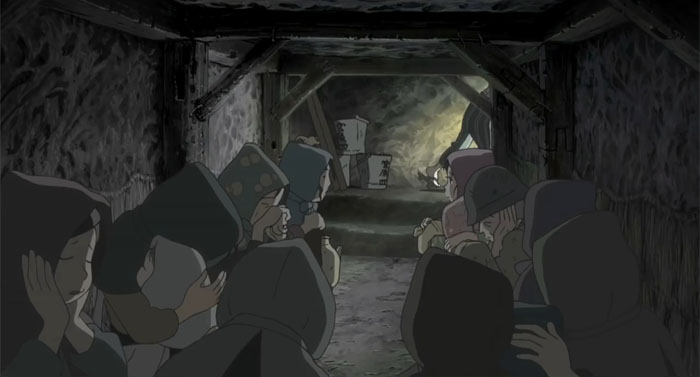 Families gather in makeshift bomb shelters in IN THIS CORNER OF THE WORLD, courtesy MAPPA,, 2016

To his credit, the filmmaker avoids downright gloom by infusing the permeable inevitability of horrific war with moments of uplifting hope and mild humor, but it’s that double-edged sword of emotion that keeps the audience riveted to every stolen moment of both familial and familiar bliss before the reality of WWII literally comes crashing down our hero’s door.

When examining the Blu-Ray’s bonus features, the one you’ll want to stick to is that of a series of parallel photos of wartime Hiroshima, destruction and all, paired with current-day photos of the same locales, showing just how much the power of the human spirit can reshape its own future. Also, those who pay close attention will notice familiar landscapes and buildings, those used as source inspiration for the animators when designing this memorable tale of love and woe.

A bittersweet, heartwrenching and beautiful piece of semi-historical drama, In This Corner of the World will both amaze you with its delicate colors and flawless palette, it will also evoke a need for global conflict resolution by displaying the effect of war on the purity of innocence, a reminder of the goodness of humanity in an age of untold violence and horror. I couldn’t recommend it more.

'Now on Blu-Ray: In This Corner of the World a Heartwrenching Animated Period Drama' has no comments