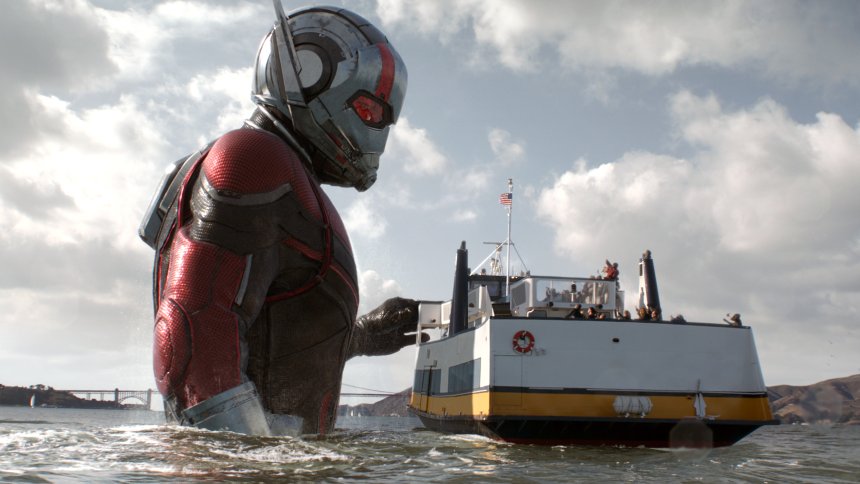 Like myself, I’m sure many of you were raised to appreciated quality over quantity, whether it be big or small. While he’s not as big a deal (no pun intended) as his Avengers brethren, Paul Rudd’s Ant-Man and his adventurous companions (I dare not call them sidekicks) are still a lot of fun to watch.

In this second outing as the ever shrinking and enlarging superhero and his lady love and fellow heroine with similar abilities, Ant-Man and the Wasp picks up where the first film left off, with the search for Janet Van Dyne, the original Wasp missing in the microverse but allegedly spotted by Rudd’s Scott Lang at the end of the original chapter. 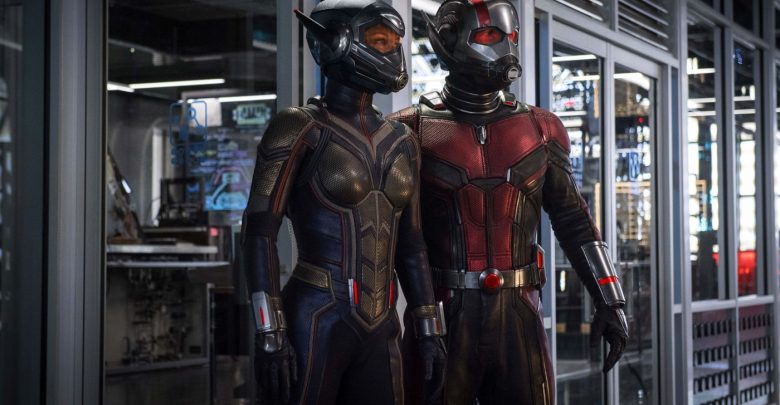 Evangeline Lilly and Paul Rudd as ANT-MAN AND THE WASP, Courtesy Marvel Films, 2018

In the aftermath of Captain America: Civil War (that’s a few movies ago for you hardcore Marvelites), Scott Lang (Paul Rudd) had been captured by the authorities after helping Captain America and his friends protect Bucky Barnes, aka The Winter Soldier, at an airport in Germany,

As a means to return home to see his daughter as part of a plea deal under the Sokovia Accords, Lang is forced to stay confined under house arrest for two years. Upon learning that Hank Pym (Michael Douglas) and his daughter Hope Van Dyne (Evangeline Lilly) are shadily obtaining black market tech to complete a miniaturization tunnel to travel to the quantum realm to retrieve Janet (Michelle Pfeiffer), Scott must decide whether to cleverly avoid detection and break from confinement, so to protect Hank and Hope against new enemies, including their shady tech seller (Walton Goggins) and an intangible girl dubbed “Ghost” (Hannah-John Kamen), who seeks the Pym tech to cure her own condition.

As the window of opportunity to reach Janet shrinks (again, no pun intended, folks!), Scott and Hope must suit up and thwart these new foes , all while escaping federal authorities hoping to catch them in breach of the Accords and finding all the right components to bring Janet home once and for all. 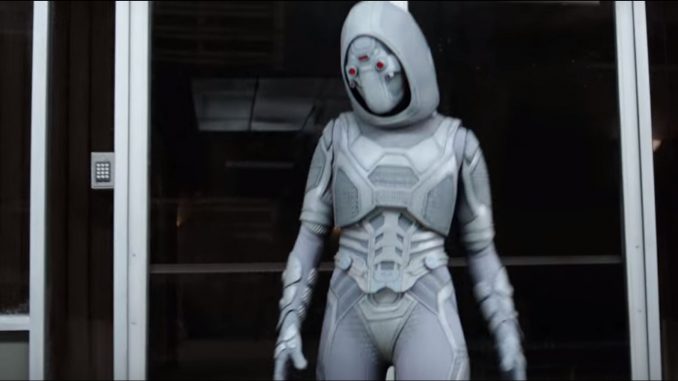 Hannah John-Kamen as Ghost in ANT-MAN AND THE WASP, Courtesy Marvel Films, 2018

Though the Ant-Man character was never as prestigious or shiny as his fellow, top-shelf mates, there’s always been a welcome warmth and family-oriented kindness to this line of stories in the Marvel Cinematic Universe. Filled with more humor and one-liners than its more serious franchise cousins, it’s Rudd’s lightning-quick repartee and that of his crew (including the hilarious Michael Pena as the oversharing Luis) that truly makes this sequel work.

Well, that and the amazing visual feats that allow us to see the world from a different perspective, whether it’s in a miniature car, an oversize Pez dispenser or a giant salt shaker, the versatility with which these characters deal with their opponents makes for a bit more fun than mere fisticuffs, which you can find in any other Marvel movie.

This sequel allows for Evangeline Lilly to shine as the winged Wasp, a more experienced shrinker whose agility in battle far exceeds that of her crime-fighting partner and paramour. Kudos to the producers for introducing and reinventing the Ghost, an ambiguous villain in the comics but a desperate vigilante in this movie, a girl whose existence is threatened when she learns she must harness quantum energy to end her phasing episodes or vanish permanently.

Extra points for introducing fringe Marvel characters like Laurence Fishburne’s Bill Foster, who in the comics was known as Giant-Man. The only downside of this film is that of a less than stellar villain in the form of Sonny Burch. Though Walton Goggins revels in the role as a shady black market dealer, the caliber of his limited character just doesn’t mesh with the story, very much like how irrelevant and extraneous Sam Rockwell’s Justin Hammer seemed in Iron Man 2.

I’d have expected a generous load of extras to be included in the Blu-Ray combo set, but aside from the ubiquitous digital copy, a very weak gag reel and a handful of very brief featurettes, there is little to write home about this time around.

Suffice it to say that you’ll obviously need to sit through the credits, so to know how this film ties into the MCU’s recent outings and their connection to Avengers Infinity War. Do your homework, folks. There’s another few films out next year. You wouldn’t want to be left behind, now, would you?

'Now on Blu-Ray: Ant-Man and the Wasp a Worthy Caper of All Things Great and Small' has no comments