Given this decade’s thematic movement towards the live-action adaptation of animated works, mostly thanks to modern visual effects finally able to offer worthy results, does it really come as any surprise that the mighty House of Mouse, who by now not only still owns its own animated films, but Lucasfilm, Marvel and (soon enough) 20th Century Fox, would jump on the bandwagon with so much verve and intent?

Look at the release slate of such projects brought into digital flesh in recent years: Maleficent, Beauty and the Beast, Cinderella, Alice in Wonderland, and the upcoming Dumbo and Aladdin. Some see it as a chance to revisit popular properties, while others look at it as more of an opportunistic cash grab.

My personal take on it is that the final product should at least do the original story justice. In this particular instance, with this post-war era sequel to Winnie the Pooh, the result is a mixed bag, one of nostalgic reminiscence paired with a morality tale better suited to Mary Poppins than the Hundred-Acre Wood. 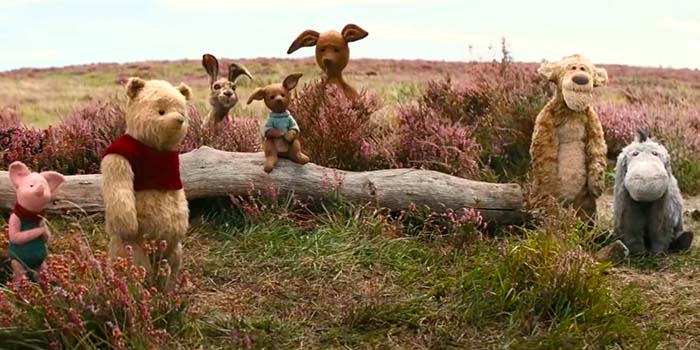 Some of the gang from the Hundred-Acre Wood, namely Piglet, Winnie the Pooh, Rabbit, Roo, Kanga, Tigger and Eeyore, in CHRISTOPHER ROBIN, courtesy Disney. 2018.

The good old days of young Christopher Robin spending his time having tea parties with his stuffed animal friends have come and long gone, with a now fully grown Christopher (Ewan McGregor) living in London, married to the lovely and patient Evelyn (Hayley Atwell) and father to the precocious Madeline (Bronte Carmichael.)

The high-end luggage company our adult protagonist works for is undergoing some staff cuts. Actually, that is unless a way can be found to cut down on costs. This forces Christopher Robin to stay behind in the city to work out a solution while his family heads to the family cottage up North.

With difficult days ahead, spent agonizing over who to let go in light of management’s reduced staffing request, who best to come to the rescue than Pooh Bear, who emerges out of a London tree trunk (you have to love those convenient wormholes!) to speak with his childhood friend, and to make see the more important things in life. Could it be that a work solution might show itself, thanks to a new perspective brought on by an emergency visit back to the Hundred-Acre Wood? 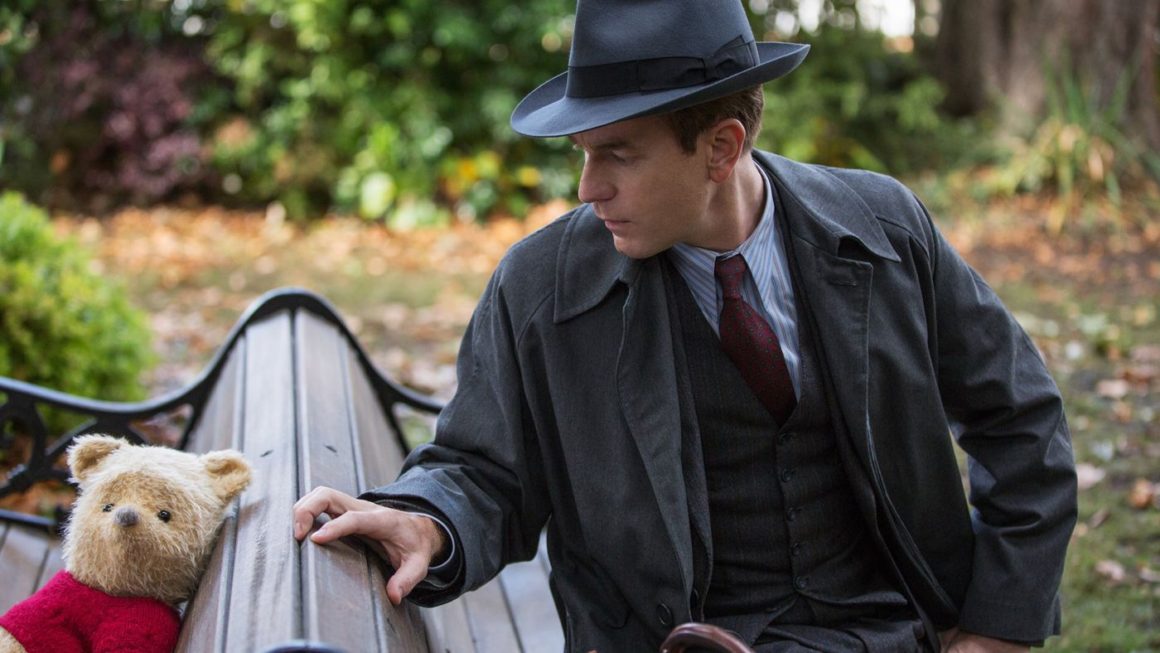 The first instinctual move seasoned Winnie the Pooh or A.A. Milne fans will want to make, is probably to compare this story to the recently released biopic Goodbye Christopher Robin, which starred Domnhall Gleeson as the war-worn author as he developed a series of children’s stories featuring his imaginative boy, only for said kid to suffer the pressures of unwelcome fandom.

This quasi-sequel takes a much different route, imagining Christopher Robin (whose last name Milne is somehow puzzlingly changed to last name Robin) as a latter-day George Banks, as if Winnifred, Michael and Jane needed attention from their husband and father, with the Hundred-Acre Wood crew stepping in for Mary Poppins.

Whereas the aforementioned biopic focused on the dangers of using your child as a marketing tool, Christopher Robin goes for a much lighter story in tone, without resorting to slapstick. Nostalgia kicks in as the familiar language exchanged between Pooh and his stuffed friends or with their now-grown bestie, brings us right back into Milne’s works, now with the added privilege of realistic CGI magic.

This magic is only boosted by a fine cast of voice actors, most notably Jim Cummings, who took over Pooh duties from the original voice of Pooh, Sterling Holloway, whom most of us grew up with in the 1970s original animated film.  Other recognizable voices include Brad Garrett’s (Everybody Loves Raymond) basso profundo as Eeyore, Peter Capaldi (Doctor Who) as the obsessive Rabbit and Toby Jones (Captain America: the first Avenger) as Owl.

Expect the usual bonus features that one would imagine coming form a CGI-rich live-action adaptation of a beloved tale, with pieces about bringing the animals to life, some time spent with the voice actors (mostly Cummings) and the legacy of Pooh features as released by the Walt Disney Company. A trip down memory lane, to be sure.

It’s going to be hard deciding whether to love this nostalgic bit of escapism for its positive values, or find issues with its creative shortcuts and heavyhanded morality.

Personally, I’m just glad to see the gang back together, quirks and all. Are you?

'Now on Blu-Ray: Christopher Robin Gets Help in Re-Establishing His Life’s Priorities' has no comments