There are so many tropes to think of in modern science-fiction, both written and cinematic: there’s time travel, robot Armageddon, space faring and my personal favorite, human evolution by way of genetic advancement or manipulation, leading to your garden variety super soldier or Avenger of choice, among others.

Then there’s the cool one offs where a story line will tweak its premise just ever so slightly, so to make for an implausible yet interesting tale about everyday drama, with a neat sciency twist thrown in, hopefully to great effect.

In the case of Bill Oliver’s curious tale Jonathan, the choice is that of examining the life of one male adult who’s lived an entire life with two distinct, fully conscious but separate identities taking turns sharing the one body, and all that could possibly imply.

Ansel Elgort as both Jonathan and John, in JONATHAN, courtesy Well Go USA, 2018.

Jonathan (Ansel Elgort) is a young, handsome, polite and mild-mannered man with a promising career as an architect, whose private life is atypical, in that he is a medical phenomenon: he shares his body with a second, fully developed consciousness, that of his “brother” John, a more laid back, socially engaged, carefree type.

Thanks to a medical marvel developed by pioneering doctor Mira Nariman (Patricia Clarkson), both consciousnesses can take turns being “awake”, for exactly twelve hours at a time. The brothers collaborate on living a full life by leaving each other detailed updates by way of a recorded message the other reads upon waking up (either at 7am or 7pm, their switch-over threshold), to avoid any misunderstandings with those unaware of his particular predicament. The hope is that they give each other four hours’ sleep to avoid mutual exhaustion.

When unknown clues start popping up leading Jonathan to feel like John isn’t telling him everything, the inquisitive architect starts investigating his other self, even leading him to develop feelings for bartender Elena (Suki Waterhouse), a girl John has been seeing without informing Jonathan.

What follows is a battle of wills over whether they can continue to keep co-existing or whether one side may decide to eradicate the other in order to live a much fuller life free of rules and constraints. 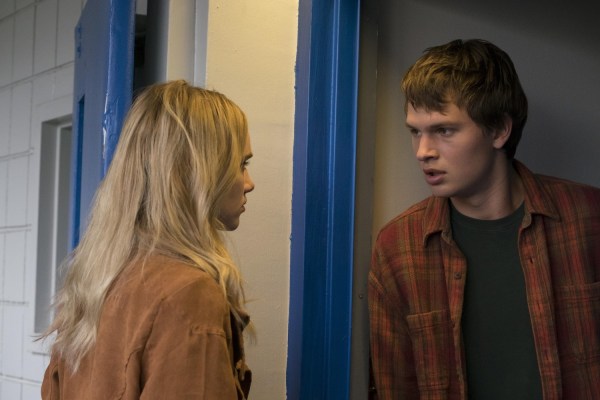 The concept is undeniably interesting, albeit flawed. Rather than take the well worn route of split personality disorder, the script takes it one step further by assuming the shared body approach, making for a curious study of feasibility, both socially and physically. This works well enough plot-wise, with Elgort managing to play both sides convincingly, offering two very separate, believable performances.

The tense mystery of not knowing what might transpire while the other side slumbers into unconsciousness makes for a gripping premise, when done right.

Despite this neat concept, the narrative often stalls and has trouble finding its way back into the tense moments, which feel disconnected from one scene to another. Ironically, we start to feel like there’s more story we’re missing to help us get a better flow over the film’s 95-minute running time.

Patricia Clarkson doesn’t really fully develop as the brilliant doctor whose take on it all is to treat them like children of her own, but acting most unprofessionally and ethically, based on her own set of values. This makes for an awkward portrayal, rendering her performance too stereotypical and flat.

Suki Waterhouse fares well as the love interest, but her inclusion into the story feels spotty and forced, which is a shame given the actress’ capable role here.

Matt Bomer also pops up as a private investigator hired by Jonathan to spy on his brother, but barely registers in the one scene he shares with Elgort, a wasted role to be sure.

The narrative is often forced into implausible leaps of logic, even by science-fiction standards (some characters take time adapting to John/Jonathan’s predicament while a taxi driver, a perfect stranger, quickly goes with the flow? Yeah right!), while many plot points dare attempt some interesting approaches, before quickly dropping them as if they might not pan out. The whole mess feels disorganized and thinly veiled under the premise of the lead character’s uncertainty towards his other self.

The blu-ray disc is as bare bones as its pseudo Jekyll and Hyde concept, with only the film’s trailer offered, and nothing else. A bit disappointing, as we could probably have benefited from a bit more information on the film’s intentions. The lack of precision and lackadaisical dialogue only highlights the film’s failures, despite fair acting by those involved (however long or briefly their appeared, anyway.)

For hardcore fans of Elgort’s works or sci-fi enthusiasts who are more into what is being implied rather than shown.

'Blu-Ray Review: Jonathan' has no comments