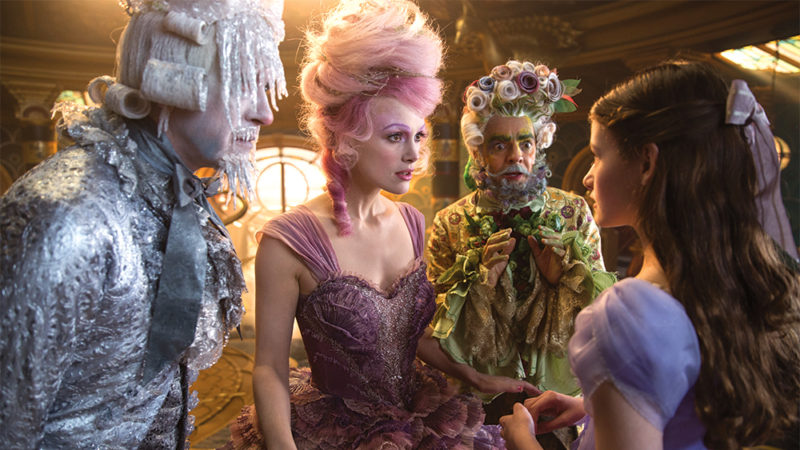 By definition, having hundreds of millions of dollars in production funds shouldn’t necessarily mean one should sacrifice quality over quantity. Furthermore, one should expect that source material wouldn’t be skimmed over, much less vaguely referenced for commercial gain.

With much pizzazz and very little memorable substance, this pretty looking fantasy tale leaves much to be desired, with flat performances, extravagant visual pieces and little to support any of it. 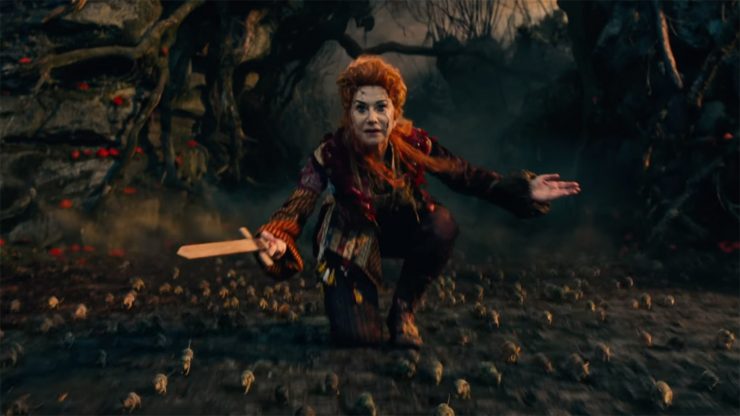 Dame Helen Mirren as Mother Ginger in THE NUTCRACKER AND THE FOUR REALMS, courtesy Disney, 2018

Young Clara (Mackenzie Foy) still mourns the death of her mother, along with her bereaved but proper British father Mr. Stahlbaum (Matthew Macfadyen) and siblings (Ellie Bamber and Tom Sweet.) As their father urges them to get dressed for the annual Christmas Ball hosted by wealthy inventor-engineer Drosselmeyer (Morgan Freeman), they each receive a gift from their late mother, saved until that evening.

Clara receives an ornate mechanical egg with a missing key. Frustrated with the contraption, she takes it to the ball to show to Drosselmeyer, only to be led into a prize hunt throughout the house, and magically thrust into a parallel world known as the Four Realms.

There, she learns her mother had been their Queen, and her passing has thrown the lands into turmoil. With guidance by The Sugar Plum Fairy (Keira Knightley) and moral support by fellow regents Shiver (Richard E. Grant) and Hawthorne (Eugenio Derbez), Clara learns she must obtain the missing key from Mother Ginger (Dame Helen Mirren) and the Mouse King, who have been at odds with the other realms for years.

With ingenuity and resourcefulness, it’s up to Clara to live up to her newfound calling as Princess of the Four Realms to resolve the conflict, find the key to her mother’s gift and possibly find herself in the process. 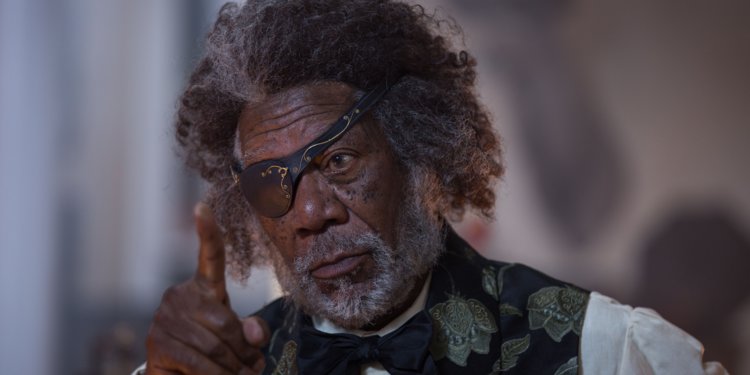 Morgan Freeman as Drosselmeyer in THE NUTCRACKER AND THE FOUR REALMS, courtesy Disney, 2018

Sure, there have been a slew of live action adaptations of Disney classics, which led audiences to expect larger than life sets, effects and cast to meet up to the expectations of their animated counterparts. While this particular film never had its full length animated treatment (except for an inventive and semi-abstract segment in the 1940s classic Fantasia), it still delivers visually, with ornate sets, lavish colors permeating the screen, costumes and a handful of dance numbers by American Ballet Theatre dancer Misty Copeland.

Oh, where to start…like the old saying goes, “all dressed up, and nowhere to go.” As remarkably beautiful and colorful as the production may be, the plot and editing is a mess, like the script had been written on a vase that broke and got pieced together again, without knowing what went together originally.

Very little chemistry exists between lead Foy and her co-stars, with too much focus being put on the special effect sequences, leaving us with hollow performances that are either wooden (no pun intended, Mr. Nutcracker) or laughably over the top.

Keira Knightley goes a bit overboard with her bubbly Sugar Plum, chewing up the scenery and leaving co-stars Grant and Derbez to stand around in the background with little to say or do.

Dame Helen Mirren feels largely wasted in what becomes a minor role with a handful of appearances. Ditto Morgan Freeman, who pops up at the beginning and end of the film, dispensing his usual nuggets of wisdom in that soft, syrupy voice of his.

Much of the subplots feel incomplete of half-baked, and any reference to Tchaikovsky’s composition comes and goes in half-bars heard in the background, peppered here and there through the film, but not enough to make this film qualify as a musical.

The release’s Blu-Ray features include an interview with ballerina Misty Copeland, who dances in select numbers during the second act. Music videos are also included (not surprising, given the usual Disney marketing machine format for such home video titles), deleted scenes and glimpses of production behind the scenes.

All in all, the film looks nice, sounds nice, and feels nice, but why all the artifice?

If the end result feels as hollow and disjointed as its story’s tin soldiers, all of it feels like an expensive lot of nothing, and all too reminiscent of recent live action adaptations of similar tales of hidden realms, not unlike Disney’s recent Alice in Wonderland films.

The Nutcracker and the Four Realms comes off feeling like a typical Disney musical, sans music nor dance. Just an expensive and larger than life looking centerpiece, lacking a full purpose for the room it occupies. It’s highly doubtful any group of kids would rush to their playroom shelf to reach for this one, let alone any chance of repeat viewings.

'Blu-Ray Review: The Nutcracker and the Four Realms' has no comments