A worthy, trivia-filled follow-up to the successful and popular 2012 film about two kids’ arcade characters who become the unlikeliest of buddies, Disney’s Ralph Breaks the Internet brings the computer and online world to life, taking its heroes through adventures they could never possibly imagine, into a new world called The Internet.

Prepare for a dizzying but hilarious ride. And bring a couple hankies. There’ll be both some sad and happy tears. Well, mostly tears of laughter. 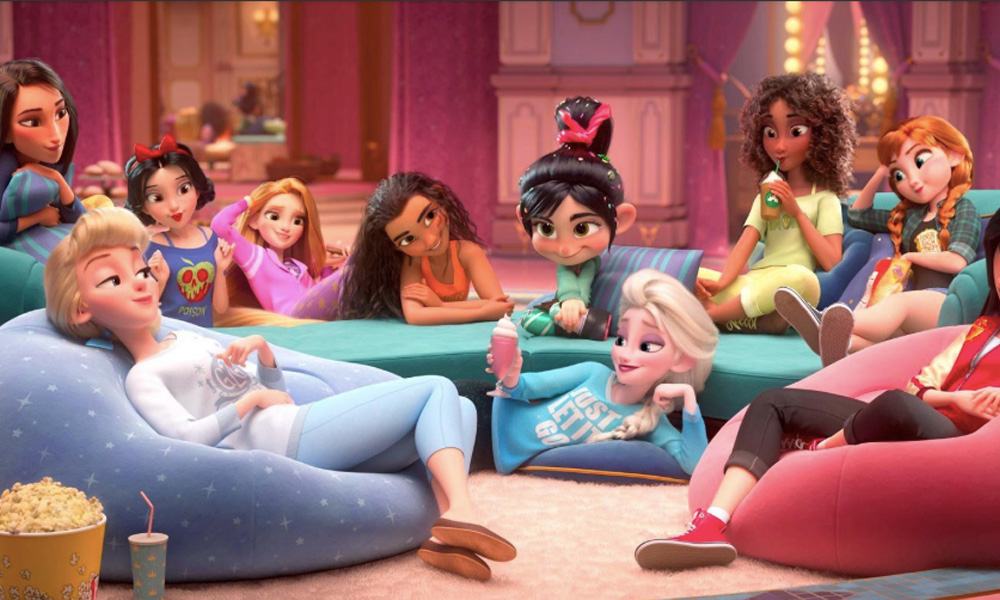 Vanellope (Sarah Silverman) drops by to chat with the Disney Princesses in RALPH BREAKS THE INTERNET, courtesy Disney Home Video, 2019

When the impulsive young Vanellope (voiced by Sarah Silverman) decides to create a new race track inside her Sugar Rush arcade game, leading to expensive damage to her console’s steering wheel, old man Litwack obtains the internet for his office and tries to find an affordable replacement on a site called eBay.

When the Wi-Fi router gets plugged in, Vanellope and Wreck-It-Ralph (voice by John C. Reilly) discover an access path to the greater world beyond — namely, the Internet — and decide to venture into its vast cyber-landscape in search of Litwack’s needed replacement part, so to salvage his lucrative game and prevent the arcade from closing down.

What the odd pair don’t realize is just how busy — and crazy — the Internet can be, as they face all sorts of new enemies, like viruses, pop-ups, competitive racers and, yes, spam.

You can really tell by watching this fun sequel, that the animators have made the most out of Disney’s newly acquired properties like that of Lucasfilm and Marvel. By having access to a veritable treasure trove of characters and pop culture references now their own (not to mention its own extensive Disney catalog), the animators are able to tap into all of the Disney Princesses, the Marvel superheroes and a handful of X-Wings, Tie-Fighters, and so on.

The inclusion of these many familiar icons makes for a fun internet, especially how much fun can be had out of writing up the culture clash two 8-bit graphic heroes can experience when discovering concepts like YouTube, Google, eBay and Twitter. Or at the very least, its fictitious equivalent.

The undeniable chemistry between Sarah Silverman and John C. Reilly’s characters truly shine through as Vanellope and Ralph experience the ups and downs of trust and faith issues, regarding the future of their friendship bond.

The cast of voices inhabiting this incredibly fun sequel couldn’t be better organized, with regulars like like Jack McBrayer and Jane Lynch      returning for another round, Joining the cast are Gal Gadot (as a badass street racer), Alan Tudyk (as a Wikipedia/Google search engine curator) and Alfred Molina (as a nefarious bottom-dwelling virus.)

Another great win for the production team was their ability to gather the majority of the remaining Disney Princesses voice actresses (with a few exceptions due to age), for a memorable scene where Vanellope meets everyone from Snow White to Moana.

Honestly? There really isn’t much to skip here, what with the plethora of goodies on screen. If anything, I’d say the only downside is that the film couldn’t be longer. Sure, the whole distrust/road to redemption plot arc may seem a bit overdone and cliched, but even so, it’s done well enough here to avoid a negative mark.

I recommend you focus on the short featurette about locating Easter Eggs, which will invariable force you to rewatch the film frame by frame several times, if only to find a handful of extra trivia bits embedded in backgrounds, some of them clever pop culture references, others inside jokes by the animators. This isn’t dissimilar to how Warner Brothers inundated a game world in Ready Player One, causing viewers to buy a Blu-Ray copy if only to freeze frame the clips and locate hundreds of references thrown in for good measure.

Another great piece is “How We Broke the Internet”, with senior animators on the project explaining how they were charged with a particular aspect of this busy Internet world, and how they chose to illustrate it for wide audiences.

The unfinished deleted scenes are meh, and quickly make you realize why they were nuked in the first place. The music videos don’t really add much to the bonus features and are pretty much a Disney home video standard by now.

'Blu-Ray Review: Ralph Breaks the Internet' has no comments