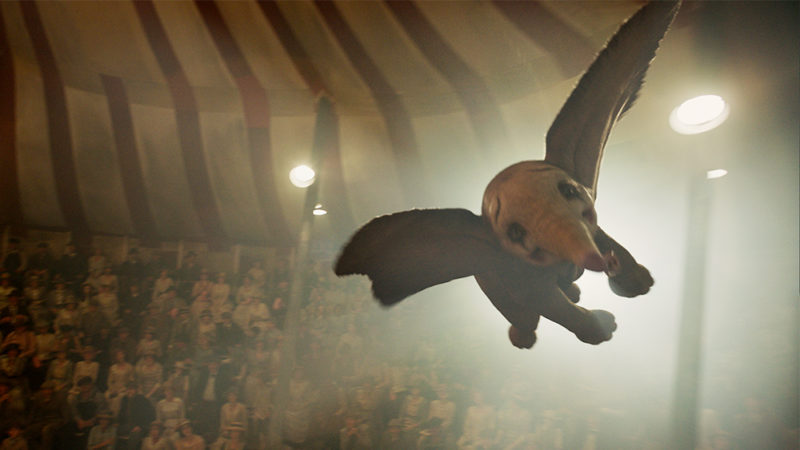 The latest in a string of live-action adaptations of Disney’s own catalogue of animated classics, Dumbo is a frustrating double-edged sword, in that it does pull at the heartstrings while benefiting from director Tim Burton’s flair for the fantastic, though it does so at the expense of any real well-rounded characterization amidst its dense cast of actors and circus professionals alike. 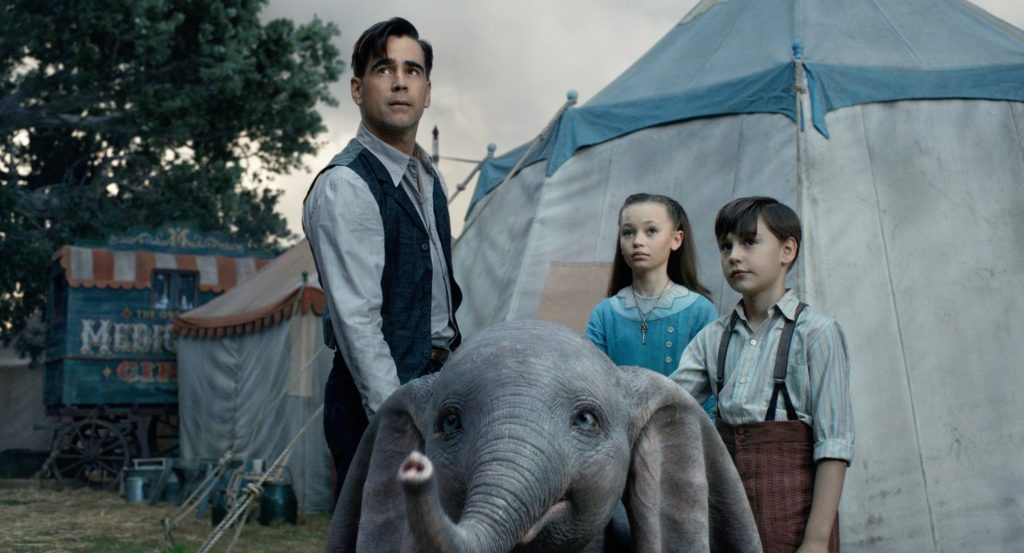 Set at the end of the first World War, the film features an injured soldier named Holt Farrier (Colin Farrell), a widower and father of two who returns from the war minus an arm, only to find his two children and the traveling circus they belong to, falling on difficult financial times.

The circus owner, Max Medici (Danny DeVito), informs Holt that they lost his wife to the Spanish flu the previous season, and had to sell off some of the livestock attractions to makes ends meet.

Fortunes soon change, however, when the resident mother elephant, Mrs. Jumbo, gives birth to an unusual baby with unusually large floppy ears. The overprotective mother becomes aggressive when the baby starts getting used in upcoming acts. Forced to sell off Mrs. Jumbo back due to her status as a possible security threat to paying audiences,  Soon dubbed Dumbo, Holt’s daughter and son (Nico Parker and Finley Hobbins) discover that the young elephant can actually fly if holding onto a feather inside its snout, leading the troupe to realize that success might be on the horizon.

Of course, fortunes might change when an unscrupulous millionaire entertainer (Michael Keaton) and his muse (Eva Green) come knocking, looking to seduce the troupe with hollow promises, all with the purpose of appropriating Dumbo for pure profit, at the expense of decent animal treatment. Will Holt, Medici and the gang figure this out in time to save their floppy eared friend? 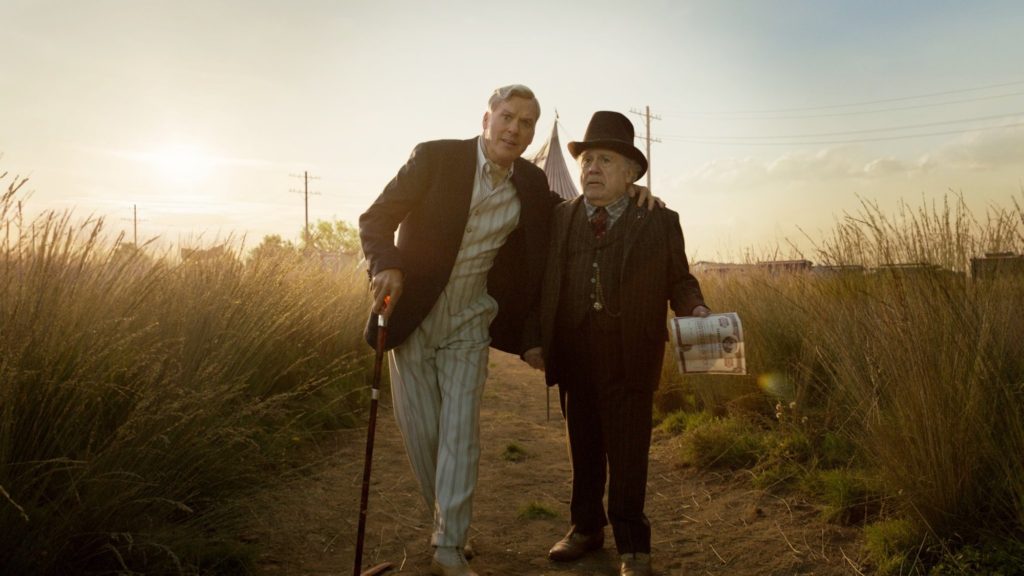 It’s getting increasingly hard to get enthused about these numerous live-action adaptations, given that the entire library feels like it’s being systematically mined for another round of profits, with very little concern for quality, other than the need to push out another for the sake of novelty.

While Dumbo might not rank as high as, say, the remakes of Beauty and the Beast or Aladdin, at least this latest outing benefits from the original’s more obscure plot and lack of human characters, allowing director Tim Burton to try and infuse some heart and soul into his story.

Though the idea of a struggling widower and his kids might aim for the heartstrings, very little of it resonates with audiences. Either the actors were miscast or simply aren’t given enough to go on, in a story that, well, really originally focused on Dumbo and his diminutive mouse friend.

Here, Burton forgoes the usual neo-gothic black and white scheme in favor of a post-war palette of early 20th century primary hues amidst the gloominess, however all the backdrops and visual effects in the world can’t really elevate a poorly conceived set of two-dimensional characters stuck in a very basic premise that goes nowhere fast. Also, a weird segue into a steampunk-like setting in the third act takes the story into a most bizarre direction, which doesn’t really help at all.

At least the elephants look real, right? We truly believe a baby-blue-eyed elephant can fly, but enough to sustain a 130 minute story? Call circus management, there’s fraud afoot. I demand a refund.

As always, the Disney blu-ray disc comes with a variety of extras such as featurettes on the cast’s training as circus performers, production design, a brief blooper reel, a music video by Arcade Fire, a handful of deleted scenes and a look at some of the Easter eggs injected into the narrative, to satisfy animation fanboys.

With several other live-action films looming on the horizon (Mulan, Lady and the Tramp, Maleficent: Mistress of Evil), we’ll have to accept that not all of these cinematic arrows will find their target. It’s truly a subjective matter, open to interpretation as each fan seeks to confirm whether their own personal favorite Disney film looks good with a real-life cast. It’s a hit-and-miss affair, and a frustrating one at that.

'Blu-Ray Review: Dumbo' has no comments